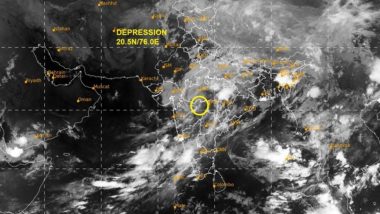 Mumbai, June 4: India Meteorological Department (IMD) in its latest update has said that the Deep Depression weakened into a Depression over west Vidarbha (Maharashtra) at 0530 IST of June 4, to move east-northeastwards and weaken into a Well Marked Low-Pressure Area (WML) by today evening. Cyclone Nisarga made its landfall on June 3 near Raigad district. What Does Cyclone Landfall Mean? Here's Your Glossary For Jargons Related to Cyclonic Storm.

According to reports, the system is currently over Madhya Maharashtra and moving north-eastwards at a speed of 27 kmph. The weather department has predicted light to moderate rainfall at most places, and heavy to very heavy falls at isolated places over north Madhya Maharashtra, Marathawada, Vidarbha and south Madhya Pradesh today. Places over south Konkan and Goa, and south Gujarat, could also witness rainfall. Gati Cyclone to Be Next After Nisarga; How it Got Its Name and What It Means.

On Wednesday, Mumbaikars and people in neighbouring areas, including those in coastal Gujarat districts had braced for the cyclone but heaved a sigh of great relief as Nisarga's damage appeared limited to the uprooting of trees in affected areas and tin rooftops being blown away. The cyclone did not cause any major damage on the southern coast of Gujarat following landfall and it passed without any major incidents and casualties, said state relief commissioner.

(The above story first appeared on LatestLY on Jun 04, 2020 08:51 AM IST. For more news and updates on politics, world, sports, entertainment and lifestyle, log on to our website latestly.com).