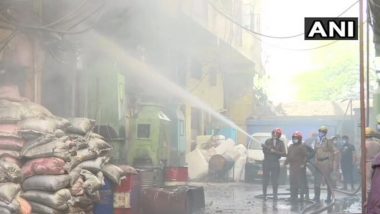 Delhi, May 26: A fire broke out at a footwear manufacturing factory in Keshavpuram area in the national capital. According to the latest ANI update, firefighting operations are underway and  23 fire engines have reached the spot to douse the flames. This is breaking news and more details on this are awaited.

Fire Breaks Out at a Footwear Manufacturing Factory:

Delhi: Operation to douse the fire, which broke out at a footwear factory in Keshavpuram area, underway by the fire fighters. 23 fire engines are present at the spot. More details awaited. https://t.co/UrxlOl2FHo pic.twitter.com/4bxMqJFWjZ

In a similar incident over the weekend, a massive fire broke out at Cygnus hospital in South Delhi on Saturday. It is a COVID-19 designated hospital. Eight fire tenders were rushed to the spot and they managed to ring the blaze under control. Earlier this year, a fire broke out at a shoe manufacturing unit at Delhi’s Lawrence Road area.  26 fire tenders rushed to the spot to douse the raging flames.

(The above story first appeared on LatestLY on May 26, 2020 09:33 AM IST. For more news and updates on politics, world, sports, entertainment and lifestyle, log on to our website latestly.com).