All schools in Delhi will remain shut till July 31 in view of the prevailing COVID-19 situation, announced Deputy Chief Minister Manish Sisodia. 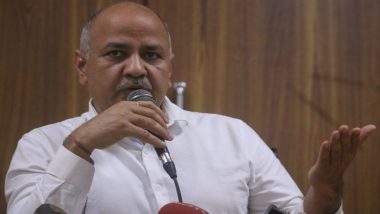 New Delhi, June 26: All schools in Delhi will remain shut till July 31 in view of the prevailing COVID-19 situation in the national capital, announced Deputy Chief Minister Manish Sisodia, who is also the Delhi Education Minister, on Friday. The schools had been closed due to the lockdown since March 23. The announcement comes days before the summer holidays are due to end in schools. With Board Exams Cancelled Thrice, Students in NE Delhi Fear Assessment Scheme May Be Disadvantage.

The Delhi government had announced summer holidays for Delhi government schools or those aided by the Delhi government from May 11 to June 30. Private schools in Delhi had also said that they will follow a similar calendar with little changes. The number of coronavirus (COVID-19) cases has been rising in the national capital. Delhi has 73,780 cases and 2,429 deaths. Door-to-Door Health Survey in Delhi to Be Completed by June 30: MHA.

Sisodia had already announced that the students of the national capital between class nursery and eight will be promoted to the next class under the "no-detention policy" of the Right to Education Act. He had also announced that with the shutting down of the schools, the education was affected and to compensate for the same, activities through recorded phone calls and messages will be given to the students up to class 8.

(The above story first appeared on LatestLY on Jun 26, 2020 07:24 PM IST. For more news and updates on politics, world, sports, entertainment and lifestyle, log on to our website latestly.com).