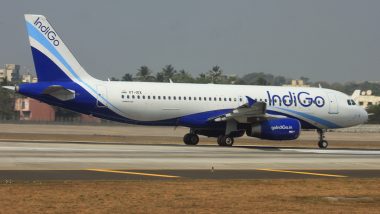 Mumbai, May 16: A drunk passenger allegedly created ruckus mid-air and forced the Doha-Bengaluru IndiGo flight to make an emergency landing at Chhatrapati Shivaji Maharaj International Airport in Mumbai late on Saturday night. The man also misbehaved with the crew members and other passengers.

As per the report published in the Hindustan Times, the man was identified as Sarfuddin Ulwar who hails from Kerala. Ulwar allegedly misbehaved with an air hostess when she tried to stop him from drinking and further abused other passengers when they intervened. After he ignored all the warnings, the pilot diverted the plane and made an emergency landing in Mumbai. Indian Passenger Forces Paris-New Delhi Air France Flight to Make Emergency Landing in Bulgaria (Watch Video).

The accused was booked under Section 336 of the Indian Penal Code (IPC) and sections 22A and 23 of the Aircraft Rules. As per the reports, he was produced in a metropolitan magistrate court on Sunday and remanded in judicial custody.

(The above story first appeared on LatestLY on May 16, 2022 06:08 PM IST. For more news and updates on politics, world, sports, entertainment and lifestyle, log on to our website latestly.com).