Nestled atop Trikuta hills in Jammu and Kashmir's Reasi district, the Mata Vaishno Devi shrine is all decked up to welcome pilgrims arriving for the nine-day Navratri festival commencing from Monday, officials said. 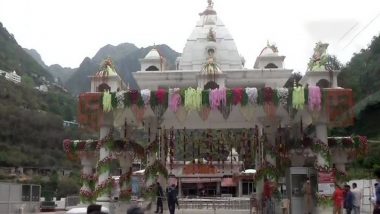 Jammu, Sept 25: Nestled atop Trikuta hills in Jammu and Kashmir's Reasi district, the Mata Vaishno Devi shrine is all decked up to welcome pilgrims arriving for the nine-day Navratri festival commencing from Monday, officials said.

Over three lakh pilgrims from across the country and abroad are expected to visit the shrine during the festival with the Shri Mata Vaishno Devi Shrine Board (SMVDSB) putting in place all necessary arrangements including security to meet the heavy rush, the officials said.

Jammu and Kashmir Lt Governor Manoj Sinha, who is also the chairman of the shrine board, on August 31 rolled out a Radio Frequency Identification (RFID) system for the pilgrims. The RFID system is part of various new projects sanctioned for the convenience of the pilgrims in the aftermath of a stampede at the shrine on New Year's Day in which 12 people lost their lives and 16 others were injured. Ghatasthapana Puja 2022 Date, Time & Vidhi for Sharad Navratri: Know About Kalash Sthapana Puja Shubh Muhurat and Rituals To Mark the Beginning of Nine-Day Navaratri Festivities.

“We have set up two control rooms and installed 120 CCTV cameras along the track and the Bhawan (sanctum sanctorum) to ensure the Yatra is regulated in a better way...The RFID card system, which is mandatory for all pilgrims, will help in better crowd management and real time tracking of pilgrims,” Chief Executive Officer, SMVDSB, Anshul Garg said.

He said the shrine and adjoining areas have been decorated with flowers and lights for the festival. “Welcome gates have also been installed and this time the shrine board is introducing selfie points enroute the cave shrine for the pilgrims,” he said. Constable Shamsher Ali of UP Police Wins Bronze Medal at the 7th All-India Police Judo Cluster 2022.

Garg said physically challenged devotees will be provided horses and battery car service free of cost to make it easy for them to offer prayers at the shrine.

“This is another new initiative of the shrine board and we have set up help desks for the convenience of persons with special needs. They will also be given priority for ‘darshan' at the Bhawan,” he said.

Katra, 42 km from winter capital Jammu, which serves as the base camp for the shrine, will witness a series of religious, cultural, sports and folk events till the culmination of the festival on October 4.

“A total of 14 different activities will be organized in Katra from September 26 to October 4,” Garg added.