Devotees mark the beginning of the nine days of Navaratri by performing the Ghatasthapana ritual on the festival's first day. The tradition is conducted to take the resolution of keeping fast and devoting oneself to the nine incarnations of Goddess Durga during the 9 festival days. 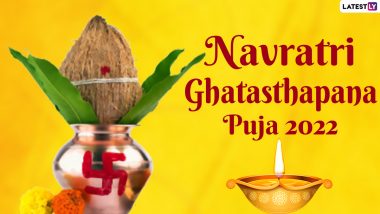 Shardiya Navaratri will be celebrated with religious devotion and grandeur for nine days to get the divine blessings of Goddess Durga. The festival is the most auspicious observance in the Hindu religion which is dedicated in veneration to the Goddess Shakti and her nine feminine manifestations. Shardiya Navratri 2022 will start on September 26, Monday, and culminate with Dussehra on October 5, Wednesday. The Navaratri festival will commence by performing the Ghatasthapana puja, which is considered the holiest and most significant tradition performed under specific rules and guidelines. Shardiya Ghatasthapana 2022 date is September 26, Monday. Also known as Kalash Sthapana, the custom is conducted as an invocation of Goddess Shakti. Our scriptures state that if the Ghatasthapana rituals are not done adequately or at the wrong time, they might bring the wrath of the Goddess. Navratri 2022 Greetings & HD Wallpapers: Maa Durga Images, WhatsApp Messages, Quotes & Wishes To Send on First Day of Sharad Navratri.

Ghatasthapana is done on the first one-third of the day while Pratipada is prevailing. If for some reason you fail to perform the Kalash Sthapana puja during the given hours, then Abhijit Muhurat is the most auspicious period to complete the puja during mid-day, which approximately lasts 48 minutes. According to Drik Panchang, Shardiya Ghatasthapana 2022 Shubh Muhurat is from 06:28 AM to 08:01 AM on September 26, Monday, and Abhijit Muhurat will begin from 12:06 PM to 12:54 PM. Navratri 2022 Bhog for 9 Days: From Ghee to Sesame Seeds, List of Prasad To Offer to 9 Forms of Goddess Durga During Sharad Navratri Festivities.

To conduct the pious Ghatasthapana puja on the first day of Navaratri, folks fill an earthen pot or clay pot with 'holy water,'  and then barley seeds are sown in it. Additionally, a Swastik is made on a Kalash or pot, and one can also put sandalwood paste, five leaves, flowers, durva grass, turmeric, rice, areca nut, five gems, or a gold coin in the Kalash. After this, you can cover the mouth of the pot with five leaves of the Mango or Ashoka tree and put a lid on it, filling it with raw rice. Afterwards, take a coconut, wrap it up with a clean new red cloth, tie the Moli thread on it, and then place it on the top of your Kalash.

Thereafter, take the Kalash with all the puja ingredients and place it above the earthen pot where you had sown the seeds. The holy Kalash is believed to be a form of Goddess Durga, invoked with complete devotion by offering it a lamp and prayers. The whole procedure, in religious terms, is known as the ritual of Navaratri Ghatasthapana.

(The above story first appeared on LatestLY on Sep 25, 2022 12:39 PM IST. For more news and updates on politics, world, sports, entertainment and lifestyle, log on to our website latestly.com).