Eid-Ul-Fitr 2022: 'Anything Can Be Planted in Punjab, Not Seeds of Hatred', Says CM Bhagwant Mann

Mann said the last government had just given district status to Malerkotla but lot is to be done to make it a district in a real sense. 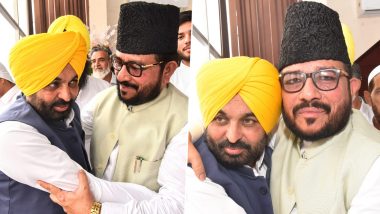 Malerkotla (Punjab), May 3: Issuing a stern warning to the anti-social elements trying to disturb the peace and harmony of the state, Punjab Chief Minister Bhagwant Mann on Tuesday said anything can be planted in the fertile land of the state but not the seeds of hatred.

The government would not spare anyone involved in nefarious attempts at weakening the strong social bonding amongst the people of the state.

Addressing the gathering after offering prayers at local Idgah on the auspicious occasion of Eid-ul-Fitr, Mann said Eid is a festival which makes humanity feel the pain of others and this sacred festival symbolises universal brotherhood, peace and amity. Eid-Ul-Fitr 2022: 'Aarti', 'Azaan' Go Together in This Uttar Pradesh Temple, Mosque With One Entrance.

Ensuring a comprehensive and all-round development of Malerkotla, the chief minister said no stone would be left unturned to develop required infrastructure in the newly-formed district.

He said the last government had just given district status to Malerkotla but lot is to be done to make it a district in a real sense.

Chief Minister Mann said he was well aware of the needs of Malerkotla and development of education and health infrastructure in the district would be given top priority.

Conceding to the demands raised by local MLA Mohmmad Jamil Ur Rehman, Mann assured that this historic city would not face any shortage of funds till the entire development process is completed to the satisfaction of its residents.

Reiterating his government's commitment of regaining the lost glory of the state, the Chief Minister said during the 46 days, people of the state have witnessed his government's initiatives to provide clean and transparent administration besides creating enormous job opportunities for the youth.

During this time, where corruption has been eradicated, a successful campaign has been launched to free the government land from illegal possessions.

Urging people to give their government at least some time to perform, Mann said that his government has been implementing every commitment made to the people.

His Cabinet has already approved massive recruitment drive to fill 26,454 posts lying vacant in various government departments, besides giving approval to amend the Act to give MLAs of the state Assembly only one pension regardless of the number of terms served.

He said that AAP government is committed to spending every penny from the state treasury on the welfare of the people.

(The above story first appeared on LatestLY on May 03, 2022 03:34 PM IST. For more news and updates on politics, world, sports, entertainment and lifestyle, log on to our website latestly.com).