Elephant ’Emma' Fed Alcohol Forcefully by Owners To Keep Her Under Control for Begging, Gets Rescued

The elephant was regularly used for begging, religious procession, wedding ceremonies, tourist rides, and other activities that her owners found to be lucrative. At night, she was tightly restrained, preventing her from lying down and resting. She was fed an unhealthy diet of sweets and fried foods that left her immunity and health severely compromised. 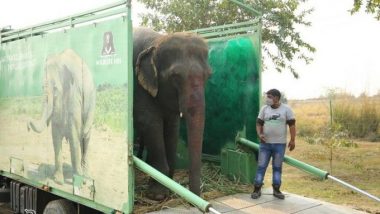 Agra, January 5: Jharkhand Forest Department and Wildlife SOS rescued a 40-year-old elephant 'Emma', who was forcefully fed alcohol by her abusive owners to keep her under control and use it for begging.

The Jharkhand Forest Department has charged the owners of violation of wildlife laws and sever neglect. The Jharkhand government has decided to dispatch the animal to the Elephant Conservation and Care Centre run by Wildlife SOS on the Agra-Mathura border where she is being treated. An official said the elephant was trafficked and forced to walk over 300 miles across the state borders into Jharkhand.

Vets at the centre said, "Due to years of abuse, Emma suffered from painful and chronic osteoarthritis condition, degenerative joints disease, footpads embedded with sharp glass, metal and stone fragments. Decades of malnourishment has deteriorated her health condition and left her fragile." CrossFit Gym Owner Does Pull-Ups on an Elephant’s Tusks at South African Animal Sanctuary, Gets Criticised (Watch Video).

The elephant was regularly used for begging, religious procession, wedding ceremonies, tourist rides, and other activities that her owners found to be lucrative. At night, she was tightly restrained, preventing her from lying down and resting. She was fed an unhealthy diet of sweets and fried foods that left her immunity and health severely compromised. To get her to work, Emma was force-fed crude country liquor. When asked, her owners said they couldn't afford proper medical treatment.

Often captive elephants are given alcohol and tobacco by their owners as home remedy to combat health problems, however, elephants can't metabolise alcohol and it is even toxic for the animal. Such callousness can also cause inebriation, which could result in the elephant running rampant across a crowded area, endangering the lives of innocent bystanders.

Brought to the elephant hospital after the Chief Wildlife Wardens of both Jharkhand and Uttar Pradesh States issued written permissions to permit the immediate transport of the ailing pachyderm, the animal is now being looked after by the trained staff.

Preliminary examination by Wildlife SOS' veterinarian revealed that the elephant kept lifting her forelimbs in an abnormal frequency to compensate for the severe pain in her legs caused by years of abuse resulting in degenerative joints disease of the forelimbs.

Ilayaraja, Deputy Director - Veterinary Services, Wildlife SOS, said, "It is extremely painful for the elephant to stand on her delicate and sensitive feet. We have extracted glass, metal, stone pieces embedded in her footpads that have caused inflammation in her forelimbs." Elephant Found Dead at Agricultural Land in Coimbatore’s Semmedu Village in Boluvampatti Forest Range, Cause of Death Yet To Be Known.

Raghunath Mishra, IFS - Divisional Forest Officer, Mathura said, "We are confident that the elephant is in the safe hands of the team at Wildlife SOS and that she will receive intensive care and treatment at the Elephant Hospital."

Bimal Lakra, IFS - Divisional Forest Officer, Ranchi said, "The elephant was illegally transported across state borders and was seized by the Forest Department on grounds of invalid documentation. Due to her deteriorating health, it was decided that the elephant be urgently transferred to the Elephant Hospital."

(The above story first appeared on LatestLY on Jan 05, 2021 11:40 PM IST. For more news and updates on politics, world, sports, entertainment and lifestyle, log on to our website latestly.com).