Elephant Found Dead at Agricultural Land in Coimbatore’s Semmedu Village in Boluvampatti Forest Range, Cause of Death Yet To Be Known

According to a tweet by ANI, the animal was found dead in Semmedu village near Alandurai in Boluvampatti forest range. The Forest Department officials are investigating the cause of death. 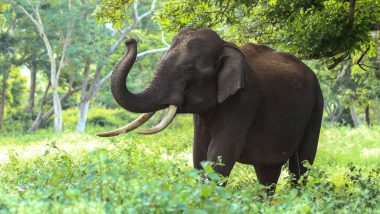 Coimbatore, January 5: A male elephant was found dead at an agricultural land in Tamil Nadu's Coimbatore on Tuesday, raising concerns about the safety and protection of wildlife in the southern state. According to a tweet by ANI, the animal was found dead in Semmedu village near Alandurai in Boluvampatti forest range. The Forest Department officials are investigating the cause of death. Elephant Calf Brought Back to Life by Thai Rescue Worker Who Used CPR After It Was Hit by a Motorcycle While Crossing a Road; Video Goes Viral!

In December, a similar incident was reported from Udhagamandalam in Tamil Nadu where a three-month-old female elephant calf was found dead in Theppakkadu forest range in Nilgiris district. Reports informed that the villagers woke up to the trumpeting of elephants and went into the forest only to notice an elephant calf lying dead.

A separate incident was reported from Sathyamangalam Tiger Reserve (STR) in Tamil Nadu where a ten-year old male elephant was electrocuted to death when it came into contact with an illegal electric fence. The fence had been erected around a farm at a village in STR, forest officials said. The elephant was found dead on a farm land at Arulwady village near Thalawady following which a Forest team visited the spot. The forest department veterinary doctor examined the elephant and declared that it died of electrocution.

(The above story first appeared on LatestLY on Jan 05, 2021 09:23 AM IST. For more news and updates on politics, world, sports, entertainment and lifestyle, log on to our website latestly.com).