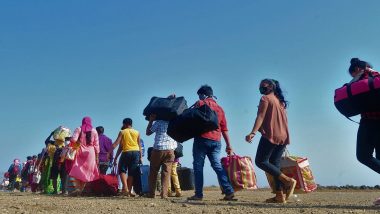 New Delhi, September 15: A day after the government said there is no centrally collated data on death of migrants amid the COVID-19 lockdown, the Home Minister on Tuesday told the Lok Sabha that the migrant crisis was triggered by "fake news". The assertion was made by Nityanand Rai, the Minister of State for Home Affairs, while responding to a query raised by Trinamool Congress MP Mala Roy. No Data on Migrant Workers' Deaths, Injuries And Job Losses During COVID-19 Lockdown, Says Government.

The Trinamool lawmaker, in his question, asked the government to explain what measures were enacted for migrants before announcing a total lockdown in India from March 25. He also sought to know why thousands of migrants were forced to starve and walk back to their villages.

In his response, the MoS Home squarely put the onus on panic that was triggered by misleading news reports for the unrest among migrant labourers. The Minister also claimed that adequate measures were announced by the Centre to aid the states in providing relief to the distressed workers.

"The migration of large number of migrant workers was triggered by panic created by fake news regarding duration of lockdown, and people, especially migrant labourers, were worried about adequate supply of basic necessities like food, drinking water, health services and shelter," Rai said in his reply before the House.

"However, the central government was fully conscious of this, and took all necessary measures to ensure that during the period of the inevitable lockdown, no citizen should be deprived of basic amenities of food, drinking water, medical facilities etc," the Minister further added.

(The above story first appeared on LatestLY on Sep 15, 2020 09:15 PM IST. For more news and updates on politics, world, sports, entertainment and lifestyle, log on to our website latestly.com).