Multiple gas cylinder explosions took place at Stock Yard at Yari Road. According to reports, the fire is from the pressurized cylinders exploding. More details on this are awaited. 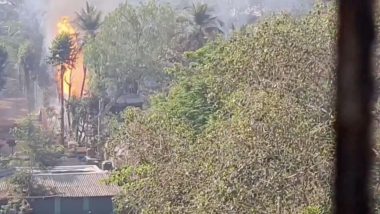 Mumbai, February 10: Fire was reported in Mumbai's Yari Road area on Wednesday. According to reports, multiple gas cylinder explosions took place at Stock Yard at Yari Road. The fire was due to pressurized cylinders exploding. According to the latest ANI update, four people were injured in a cylinder blast at a cylinder storage godown on Yari Road in Andheri. All injured shifted to a city hospital. More details on this are awaited.

In a similar incident on Tuesday, a major fire broke out in a few sample flats built on an open plot of land in Modella Mills near Thane's LBS road. Two fire engines, one jumbo water tanker and two rescue vehicles were rushed to the spot immediately. Mumbai Fire: Blaze Erupts in Mulund's Modella Colony, No Casualties Reported.

Continous explosions from a fire in Yari road ... pic.twitter.com/XDpGIYrDuF

According to reports, a housing project was developed on this land. Few sample flats were made on this plot, the walls of the flat were made using wood as these were dummy flats.

(The above story first appeared on LatestLY on Feb 10, 2021 10:53 AM IST. For more news and updates on politics, world, sports, entertainment and lifestyle, log on to our website latestly.com).