According to reports, the Muslim man was badly beaten up after he refused to to chant 'Jai Shri Ram' and 'Bharat Mata ki Jai'. The victim was quoted saying by ANI that the men made him eat pork and chant religious slogans. 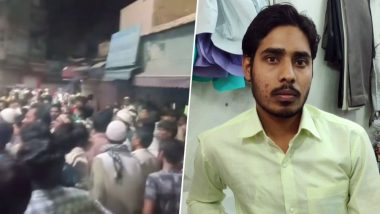 Gurugram, May 27: In a shocking incident, a Muslim man in Gurugram was allegedly thrashed by a group of four unidentified men for wearing a traditional skull cap. According to reports, the Muslim man also beaten up for refusing to chant slogans like 'Jai Shri Ram' and 'Bharat Mata ki Jai'. The victim was quoted by ANI saying that the group of men made him eat pork and chant religious slogans and tore his kurta when he was trying to escape. "They threatened me and said that wearing the cap is not allowed in the area. They removed the cap and slapped me", he added. Muslim Prisoner Branded With ‘Om’ Tattoo on Back in Delhi’s Tihar Jail Shifted to Another Prison, Probe Underway.

In a police complaint, Mohamad Barker Alam, 25, who hails from Bihar and is a resident of Jakob Pura in the city, alleged that four youth intercepted him at the Sadar Bazar Lane and asked him to remove the traditional skull cap he was wearing. The man further added saying that, "They asked to chant 'Bharat Mata ki Jai'. Following their instructions, I did that. Then they also forced me to chant 'Jai Sri Ram' which I refused. After that the accused picked up a baton and mercilessly beat me on my legs and back".  Muslim Prisoner Burn-Stamped ‘Om’ On Back in Delhi's Tihar Jail, Physically Assaulted; Court Orders Probe.

Man who was allegedly assaulted for wearing skull cap: They said they would make me eat pork & chant Jai Shri Ram & Bharat Mata ki Jai. They tore my kurta when I was trying to escape. Police say, "accused was reportedly drunk. It was a minor altercation. We've registered an FIR" pic.twitter.com/bCApKE4g5n

As soon as the incident was reported, Police rushed to the spot and initiated an investigation into the matter. Police informed that the accused was reportedly drunk and it was a minor altercation. An FIR have been registered under sections of 153 (wantonly giving provocation with intent to cause riot), 147 (rioting), 149 (member of unlawful assembly guilty of offence), 323 (voluntarily causing hurt) and 506 (criminal intimidation) of the IPC in the city police station concerned.

According to a report by IANS, Alam, who was coming from local mosque in Sadar Bazar area after offering 'namaz', shouted for help. A number of Muslims from there rushed there to help him. However, as the attackers saw them approaching, they fled the spot.

(The above story first appeared on LatestLY on May 27, 2019 08:48 AM IST. For more news and updates on politics, world, sports, entertainment and lifestyle, log on to our website latestly.com).