"The device priced at Rs 2 lakh provides oxygen to ten sick people simultaneously. The MP has placed an order for more such devices as she would pay for the devices," said Janaardan Sharma, Hema Malini's representative in Mathura. 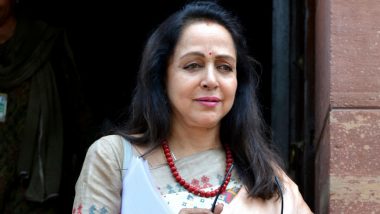 Agra, May 3: Mathura MP Hema Malini has provided oxygen enhancer devices to all the hospitals of the city. "The device priced at Rs 2 lakh provides oxygen to ten sick people simultaneously. The MP has placed an order for more such devices as she would pay for the devices," said Janaardan Sharma, Hema Malini's representative in Mathura.

Meanwhile, river activist and heritage conservationist Shravan Kumar Singh succumbed to Covid on Sunday after his relatives failed to find an oxygen bed for him in Agra, amid the spike in the infection count. "The number of bodies lined up at the four crematorium grounds in the city shows the crumbling medical infrastructure," said Hemant Gaud, a social activist, who had also failed to find an oxygen bed for Singh, who had long been crusading for a pollution-free Agra and a cleaner Yamuna. Oxygen Shortage in Uttar Pradesh: A Businessman Plan to Set Up an Oxygen Plant That Will Feed 3 Prayagraj Hospitals.

The medical industry is booming and beds are allegedly being offered to the highest bidder. The Medical Colleges Covid wards and the district hospitals are overflowing with patients. Though there has been a slight improvement in the availability of oxygen in the past two days, reports of black marketing and over-charging continue to flood the district administrative offices.

"Helplessness is writ large. This is one time when even bags full of money can not guarantee the safety of life," said senior hotelier of Agra Surendra Sharma. Thousands of villagers are lining up at unregistered doctors in smaller towns, called the "Jhola Chaaps," in local parlance.

Activist Jagan Prasad Teheriaya said "these people have saved thousands of lives in the last fortnight in the villages, because the treatment is fast and affordable. "People are afraid to go to the city because they fear there they would not only lose money but life too at the hundreds of nursing homes that have mushroomed all over without any regulation or monitoring."

Each day the number of victims has been surging. "Actually there is a total mismatch between government data and the ground realities," said a retired doctor of the city. In neighbouring Mathura, the situation is worse. The two local medical college hospitals have been accused of squeezing patients of their hard-earned money. Hospital beds were for sale between Rs 5 lakhs and Rs 8 lakhs, said senior social and culture activist Ashok Bansal.

The administration is directionless and the politicians have disappeared. Unconfirmed reports suggest that the foreign devotees of Sri Krishna in Vrindavan are caught in a catch 22 situation. They can neither leave nor can they be vaccinated, but most have chosen to confine themselves to their quarters. The temples are shut and the streets are deserted, said Jagan Nath Poddar, convener of Friends of Vrindavan.

(The above story first appeared on LatestLY on May 03, 2021 06:11 PM IST. For more news and updates on politics, world, sports, entertainment and lifestyle, log on to our website latestly.com).