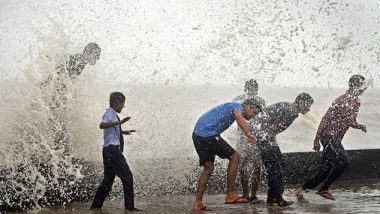 Mumbai, August 6: Mumbai will witness a high tide of 4.33 meters on Thursday, August 6, the India Meteorological Department (IMD) said. According to the weather department, the high tide is expected to lash India's financial capital at 1.51 PM today. Heavy rainfall has wrecked havoc across the city with waterlogging and flood-like situations in several parts. Mumbai's Colaba received 331.8mm rainfall in the last 24 hours ending at 5.30 am on Thursday while the Santacruz weather station in western suburbs recorded 146mm during the period.

In Mumbai, the high tide and low tide timings are keenly observed especially during the monsoon season. The reason why high tide timings play an important role is because Mumbai is located at the coastal edge facing the Arabian Sea. The India Meteorological Department (IMD) has predicted moderate to heavy rainfall in the city and suburbs and intense showers in some parts of the Mumbai Metropolitan Region in the next 24 hours. Mumbai Rains: Nair Hospital Flooded, Colaba Region Receives Heaviest Single-Day Rain in August in 46 Years (Watch Video).

The city has been witnessing torrential rains with the intensity reducing on Thursday morning. Water in some flooded areas receded which helped in  resumption of rain and road transport services. Reports inform that South Mumbai was the worst affected due to heavy rain on Wednesday while areas at the Marine Drive, Mantralaya and Kalbadevi witnessed heavy water-logging for the first time in recent years.

(The above story first appeared on LatestLY on Aug 06, 2020 11:52 AM IST. For more news and updates on politics, world, sports, entertainment and lifestyle, log on to our website latestly.com).