In a heart-wrenching incident of animal cruelty reported from the southern state of Kerala, a pregnant elephant was fed pineapple filled with firecrackers, allegedly used as a trap for wild boars, in Palakkad district. Despite being under excruciating pain, the injured elephant, belonging to Silent Valley National Park (SVNP) in Palakkad district, remain calm. 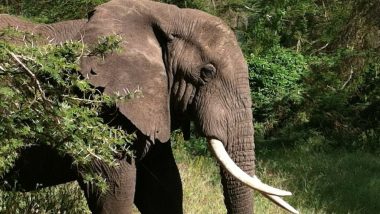 According to a report in The New Indian Express, the forest officials brought two elephants to bring the injured elephant to the shore. However, they were shocked to know that the 15-year-old elephant had died in standing position with its trunk in the water at Velliyar River. 'Rowdy' Ranga, Karnataka's Most Loved Elephant, Dies After Being Hit by Bus.

Dr David Abraham, who conducted an autopsy said that he was moved by holding foetus of the baby in its hand. "Initially, none of us was aware that the elephant was pregnant. After I had seen its heart and then happened to see the amniotic fluid did I realize that it’s pregnant,” Abraham told TNIE.

Meanwhile, forest officials have increased their intelligence networking as well as boundary patrolling after the incident. In April too, a similar such incident was reported from Pathanapuram in Kollam district. But the recent incident is touching as the elephant was pregnant and would have delivered a calf elephant in the next 22 months.

(The above story first appeared on LatestLY on Jun 02, 2020 06:40 PM IST. For more news and updates on politics, world, sports, entertainment and lifestyle, log on to our website latestly.com).