An ice cream parlour in Coimbatore city of Tamil Nadu was sealed today after authorities found it mixing alcohol in desserts. 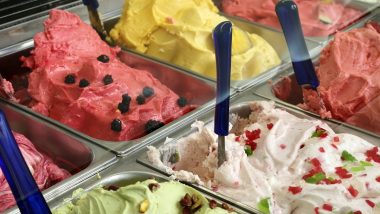 Coimbatore, October 21: An ice cream parlour in Coimbatore city of Tamil Nadu was sealed today after authorities found it mixing alcohol in desserts. Food safety official made a surprise visit to Rolling Dough Cafe at PN Palayam on the Avinashi Road on Wednesday. They found that several hygiene-related protocols were being ignored by employees of the ice cream parlour. Consequently, the parlour was sealed. Tamil Nadu: Girl Dies, Over 20 Land in Hospital After Consuming Chicken Tandoori Biryani at Arni Restaurant; Owner Detained.

The staff of Rolling Dough Cafe, according to a report by Times of India, were allegedly mixing alcohol in two of the desserts - caramel custard and dark chocolate, which officials said was not permissible as per the food safety norms. Official collected samples of the desserts and sent them for testing. They also recovered falf used bottles of whisky and brandy from the cafe. Coimbatore: Elderly Woman Returns Smartphone Found on Road to Owner, Felicitated by Police.

There were serious lapses in preparing food on part of the ice cream parlour and the premises was not sanitised, according to the officials. They said they did not find any record of how many times the kitchen was cleaned. During the inspection, they also found flies in large number inside the cafe. The FSSAI certificate was not displayed at a prominent place.

One of the most glaring lapses was that employees involved in preparing food were not wearing gloves and face mask. Their hair was allegedly not covered too. Following the inspection, officials decided to seal the ice cream parlour in the presence of officials from the revenue department. It remained unclear if the owner was booked.

(The above story first appeared on LatestLY on Oct 21, 2021 05:47 PM IST. For more news and updates on politics, world, sports, entertainment and lifestyle, log on to our website latestly.com).