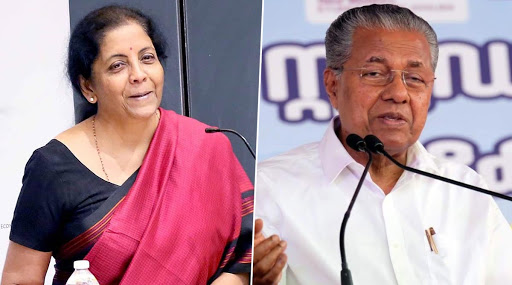 New Delhi, February 3: Union Finance Minister Nirmala Sitharaman on Sunday made it clear that Non-resident Indians (NRIs) -- working in income tax-free jurisdictions -- will have to pay the tax on the income that they generate in India. This was a clarification to Kerala Chief Minister Pinarayi Vijayan's letter who had asked about impact of new tax slabs on workers in West Asia.

Clearing the doubts, the Finance Minister had said, as quoted by Hindu Business Line, "Let's say an NRI, living in Dubai or elsewhere, is not taxed for his income letter there, but has some earnings through something in India for which he doesn't pay tax here. We are saying, for that income which is generated in India." New Income Tax Rates And Slabs For FY 2020-21: Nirmala Sitharaman Unveils 'Optional' Tax Regime in Budget, Reduces Tax For Income Up to Rs 15 Lakh Without Exemptions.

Earlier, Kerala CM had written to Prime Minister Narendra Modi and had expressed his concerns over possible implications of new Income tax provisions. He had even recorded his strong disagreement with the Budget's provisions citing that the move would hurt Indians working in the middle east.

The Kerala CM Had written, "It needs to be taken note that a large number of persons who do not fall even remotely in the category of tax evaders, will be put to great hardship due to this proposed amendment." Adding more, he had said, "The government of Kerala places on record its strong disagreement with the move in the Finance Bill, 2020, brought in under the guise of checking tax abuse, but is in reality going to hurt those who toil and bring foreign exchange to the country. The Central Government may desist." Union Budget 2020-21 Highlights: FM Nirmala Sitharaman Announces New Income Tax Slabs But With Riders, Allocates Rs 2.83 Lakh Crore For Agriculture and Rs 69,000 for Healthcare; Here Are All Updates.

According to the new proposed changes made by the Union Finance Ministry, the new Finance Bill 2020 is proposed with three major changes -- a) reducing the number of days for grant of non-resident status for tax purposes from 182 to 120, b) citizens would be deemed to be resident of India, if they don't pay taxes anywhere, and c) tightening the definition of 'non ordinarily resident'. The government cites the new provision would prevent tax abuse by citizens who don't pay taxes anywhere else in the world.