Within a day SEBI reported that investors lost Rs 13 lakh crore in market Post Budget 2019, another report states that economic slowdown in India forced the auto sector to lay off 3,50,000 workers since April. It is to be known that the jobless rate rose to 7.51 per cent in July 2019 from 5.66 per cent a year earlier. 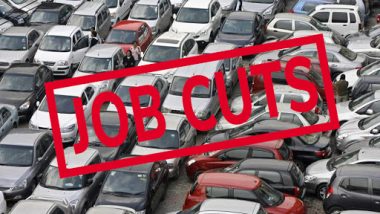 New Delhi, August 7: Within a day Securities and Exchange Board of India (SEBI) reported that investors lost Rs 13 lakh crore in market Post Budget 2019, another report is arriving that decline in the sale of cars and motorcycles are triggering massive job cuts in the auto sector. Due to the economic slowdown, initial estimates suggest that automakers, parts manufacturers and dealers have laid off about 3,50,000 workers since April.

According to the report, published by the global news agency Reuters, about 15,000 employees from the car and motorcycle makers were laid off earlier, while component manufacturers ordered 1,00,000 workers to walk out. Along with this, several auto companies are not only shutting down factories for days, but also are forced to axe shifts. Economic Crisis of India: SEBI Data Says Investors Lost Rs 13 Lakh Crore in 1 Month Post Union Budget 2019

Economic experts opine that this has been the hardest hit in the auto sector in decades, where a cut or plan to cut hundreds of jobs - mainly from their temporary labour force - was initiated by firms. The worrisome situation is considered to be the biggest challenge for the Narendra Modi-led Union government, claiming to provide millions of jobs in their tenure.

With the present condition of the auto sector blowing out of proportion, auto executives are planning to demand tax cuts and easier access to financing for both dealers and consumers.

Earlier information poured in that Japanese motorcycle maker Yamaha Motor and auto components makers including France's Valeo and Subros have laid off about 1,700 temporary workers in India, while Subros - part-owned by Japan's Denso Corp and Suzuki Motor Corp - laid off 800 workers. Among other market leaders who have laid off jobs include Honda Motor, Tata Motors and Mahindra & Mahindra. Rupee Tumbles to 70.73 Versus US Dollar as Indian Economy Moves at Snail's Pace, Chinese Yuan Fares Better in Market

Country's biggest carmaker - Maruti Suzuki - has recently cut its temporary workforce by six per cent over the past six months, while Honda has stopped production of some car models at its plant in Rajasthan since July 16. Similar are the situations with Tata Motors and Mahindra & Mahindra.

It is to be known that the jobless rate rose to 7.51 per cent in July 2019 from 5.66 per cent a year earlier, according to private data group CMIE. It might sound even surprising that auto sector - which contributes more than 7 per cent of country's GDP - is facing one of its worst downturns in decades, affecting more than 3.5 crore people directly and indirectly. Modi Govt's Tax Surcharge on Foreign Portfolio Investments Triggers Exit of Investors, Experts Question Corrective Measures

On Tuesday, reports came out that the average market capitalisation of the BSE-listed companies fell from Rs 151.35 lakh crore on the Budget Day, July 5, to Rs 138.37 lakh crore on August 5. This resulted in wiping out Rs 12.98 lakh crore from the market. With this, the recent reports of foreign portfolio investments (FPIs) exodus gain confirmation.

With Indian economy slumping and FPI exodus at an all-time high, Finance Minister Nirmala Sitharaman claimed that the government is getting inputs from various sectors and the Modi government is taking appropriate steps to improve the falling economy and is ready to hear from FPIs on 'any issue'.

(The above story first appeared on LatestLY on Aug 07, 2019 04:04 PM IST. For more news and updates on politics, world, sports, entertainment and lifestyle, log on to our website latestly.com).