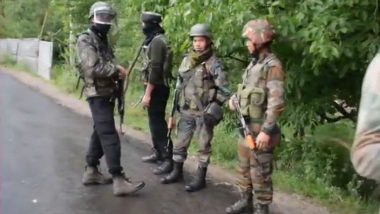 Srinagar, September 17: In a major breakthrough, three terrorists were neutralised by security forces during an encounter in Batamaloo area of Jammu and Kashmir’s Srinagar district on Thursday. A Central Reserve Police Force (CRPF) personnel was also injured in the gunfight. According to reports, the security forces cordoned off the area following the inputs about the presence of terrorists.

The encounter broke out in the area after terrorists opened on the security personnel during the search operation. In the cross-firing, a civilian was also reportedly lost her life. The identity of the terrorists is yet to be ascertained. The encounter began at 2:30 am. More details are still awaited. Jammu And Kashmir Policeman Martyred, 3 Terrorists Gunned Down in Overnight Encounter in Srinagar.

Jammu and Kashmir: Three terrorists neutralised in encounter with security forces in Batamaloo area of Srinagar

A total of 138 terrorists were killed by security forces in Jammu and Kashmir between March and August this year. Union Minister of State for Home G Kishan Reddy said that the government had adopted a zero-tolerance policy towards terrorism. Jammu And Kashmir: Three Terrorists, Including Lashkar-e-Taiba Commander, Killed in Two Separate Encounters in Shopian And Handwara.

In reply to a question in the Lok Sabha, Reddy said, “As a result, 138 terrorists have been neutralised in Jammu and Kashmir from March 1, 2020, to August 31, 2020. During this period of six months, 50 security force personnel have attained martyrdom in terrorist-related incidents and ceasefire violations, cross border firings in Jammu and Kashmir.” There were 176 attempts of infiltration from across the border from August 2019 to July 2020 and 111 were successful, he added

(The above story first appeared on LatestLY on Sep 17, 2020 08:42 AM IST. For more news and updates on politics, world, sports, entertainment and lifestyle, log on to our website latestly.com).