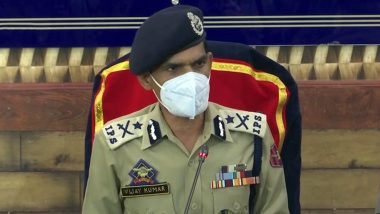 Srinagar, July 26: A day after the killing of Lashkar-e-Taiba (LeT) terrorist Ishfaq Rashid Khan, the Jammu and Kashmir Police on Sunday said that no residents of Srinagar district is now in terrorist ranks as of now. This development was confirmed by Inspector General of Police (IGP) Kashmir Vijay Kumar. Jammu and Kashmir: 2 Terrorists Gunned Down by Security Forces in Srinagar's Ranbirgarh Encounter.

Two terrorists were killed by security forces in an encounter on the outskirts of Srinagar on Saturday. In Ranbirgarh encounter, the terrorists were identified as LeT's Ishfaq Rashid Khan and Aijaz Ahmad Bhat.

Khan, a resident of Sozeith area, was involved in terrorist activities for the past two years, according to the police. Another terrorist, Bhat, a resident of South Kashmir's Pulwama district, was an important LeT cadre.

(The above story first appeared on LatestLY on Jul 26, 2020 06:09 PM IST. For more news and updates on politics, world, sports, entertainment and lifestyle, log on to our website latestly.com).