Jammu and Kashmir: Three Terrorists Gunned Down by Security Forces in Pulwama Encounter 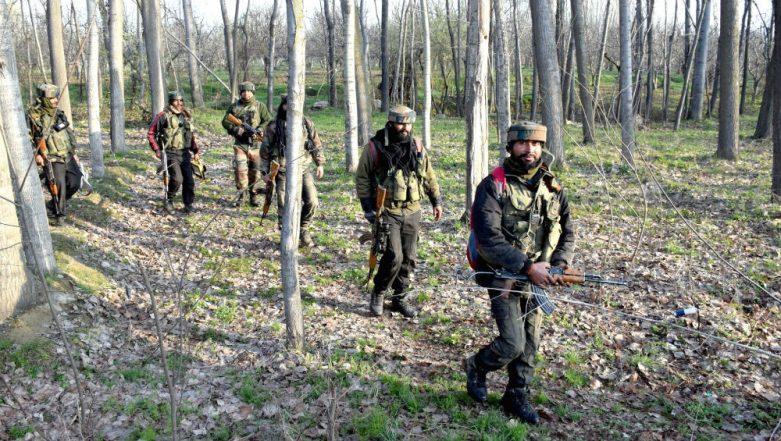 Jammu, May 18: A total of three terrorists were gunned down in a brief encounter by security forces in Jammu and Kashmir’s Pulwama district on Saturday. According to a tweet by ANI, weapons and warlike stores have been recovered from the encounter site. Police said the security forces started a cordon and search operation during night in Panzgam village after receiving information about the presence of militants there. According to reports, the gunfight broke out between terrorists & troops of 130 Battalion CRPF, 55 RR and Special Operations Group (SOG) earlier this morning. Jammu And Kashmir: 1 Soldier Martyred During Pulwama Encounter, 1 JeM Terrorist Killed.

According to a report by IANS, the hiding militants were challenged after which they opened fire at the security forces which triggered an encounter. "Two militants have been killed and their bodies have been recovered. Although firing exchanges have now stopped, the operation is still on," a police officer said. One of the slain militants has been identified as Showkat Ahmad Dar, a resident of Panzgam village. He belonged to the Hizbul Mujahideen (HM) outfit. Jammu And Kashmir: 3 Terrorists Gunned Down, 1 Jawan Martyred in Pulwama Encounter.

J&K: Visuals from Panzgam village in Awantipora where an encounter had broken out between terrorists & troops of 130 Battalion CRPF, 55 RR and Special Operations Group (SOG) earlier this morning. One terrorist has been neutralised. (visuals deferred by unspecified time) pic.twitter.com/jKruNbpW66

The identity and group affiliation of the other slain militant is being ascertained, informed sources said. According to a tweet by ANI, another gunfight was reported from Anantnag. A brief gunfight broke out between security forces & terrorists during the early hours on Saturday. The area is under cordon.

On Thursday, six militants, including a top Jaish-e-Mohammad commander, as well as a soldier and a civilian were killed and four others injured in three gunfights between security forces and militants across the Kashmir Valley. According to reports, in what is believed to be the first gunfight in Dalipora village of Pulwama district, three Jaish militants, including a top commander who had masterminded the 2017 attack on a CRPF camp, a soldier and a civilian were killed, police said.