Jammu and Kashmir: Soldier Dies by Suicide, Shoots Himself With Service Rifle at LoC in Kupwara

A soldier posted along the Line of Control (LoC) in Jammu and Kashmir's Kupwara district has committed suicide, police sources said on Thursday. 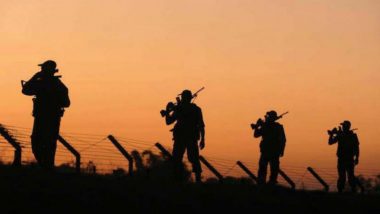 Srinagar, Sep 23: A soldier posted along the Line of Control (LoC) in Jammu and Kashmir's Kupwara district has committed suicide, police sources said on Thursday.

"A soldier committed suicide by shooting himself with his service rifle in the Keran area along the LoC in Kupwara district last night.

"The soldier, identified as Lokinder Singh Thakur, was posted with 6 Rashtriya Rifles. Jammu and Kashmir: Indian Army Officer Dies by Suicide, Shoots Self With Service Rifle in Srinagar.

"He fired at himself at about 10.30 p.m. yesterday. He was immediately shifted to a nearby army health facility, but the doctors there declared him brought dead on arrival.

"It was not immediately known as to why the soldier took the extreme step. His body has been shifted to hospital for post mortem and other medico-legal formalities," sources said.

(The above story first appeared on LatestLY on Sep 23, 2021 01:03 PM IST. For more news and updates on politics, world, sports, entertainment and lifestyle, log on to our website latestly.com).