An RTI reply has revealed that biometric systems and CCTV cameras in Jawaharlal Nehru University's server room were not vandalised on January 3. This new revelation is contrary to the claims made by JNU administration in an FIR. 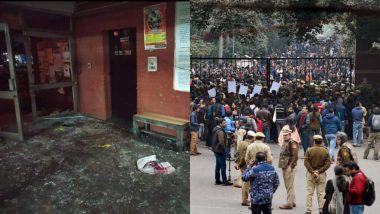 New Delhi, January 22: Amid the investigation over January 5 violence in Jawaharlal Nehru University gaining political momentum, an RTI reply has revealed that biometric systems and CCTV cameras in its server room were not vandalised on January 3. This new revelation is contrary to the claims made by JNU administration in an FIR.

According to a report, published in the News 18 news website, the JNU administration had said that the main server of the university at the CIS was shut down on January 3. It also stated that server had stopped functioning the next day 'due to power supply disruption', reveals the RTI filed under the 'life and liberty' clause by an activist. JNU Violence: From Delhi Police Press Conference to India Today Sting Operation & JNUSU President Aishe Ghosh's Response; Here's All That Happened.

Apart from the surprising revelation, the JNU administration had clarified that there is "no continuous" CCTV footage available which were installed at North/Main gate of the JNU campus from 3 pm to 11 pm on January 5. This was the day when the violence took place in JNU, where over 30 students were injured and 12 teachers were attacked.

Following the recent revelation, the RTI reply points out the discrepancies in the FIR filed by the university and the statements given by the administrative staff post-January 5 violence. Earlier, in the FIR, JNU had accused students of vandalism which led to the malfunctioning of biometric attendance and CCTV surveillance system.

It is to be known that both RSS-affiliated Akhil Bharatiya Vidyarthi Parishad (ABVP) and Leftist outfits have accused each other for the violence. Based on the initial inputs from the varisty administration, Delhi Police had named nine people -- including JNUSU chief Aishe Ghosh -- for vandalising server room and violence. The investigation in the case is still underway.

(The above story first appeared on LatestLY on Jan 22, 2020 10:41 AM IST. For more news and updates on politics, world, sports, entertainment and lifestyle, log on to our website latestly.com).