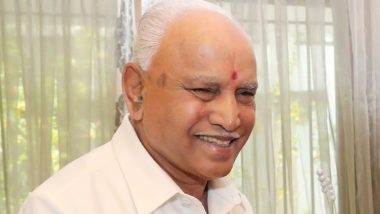 Bengaluru, August 12: A "thorough" magisterial investigation has been ordered into the riots which broke out in east Bengaluru on Tuesday night, Karnataka Chief Minister B.S. Yediyurappa said on Wednesday. "The District Magistrate has ordered a thorough investigation into the riots that took place in the jurisdiction of Godavanavahalli and Kadugodanahalli police stations in Bengaluru," he said after a high-level meeting. It was decided that an Executive Magistrate will conduct the enquiry on the basis of the National Human Rights Commission's (NHRC) guidelines.

On Tuesday night, hundreds of people ran amok after Congress MLA Akanda Srinivas Murthy's nephew Naveen posted a derogatory message on the social media. The mobs pelted stones, injured 60 policemen, and committed acts of vandalism and arson in DJ Halli, KG Halli, Pulikeshinagar and Kaval Byrasandra areas, leaving the affected places resembling a warzone. Bengaluru Violence: What Triggered the Riots in Which 3 People Were Killed And Over 60 Policemen Were Injured? Here's What We Know.

Several cars and two-wheelers were overturned and set afire by the rioters, and most of them were completely burnt. Debris from the torched vehicles was strewn around on the streets, and some of it continued to smoulder on Wednesday as well.

Streetlights and CCTV cameras of commercial establishments were also vandalised. Many people living in the vicinity of the riot-hit areas left their homes with children after witnessing the distressing scenes. The rioters also targetted houses at random and even closed entry to some localities, making it difficult for the police and other emergency services to enter.

While three people were killed in police firing to disperse the mob, over 100 people have been arrested, including Students Democratic Party of India leader Muzammil Pasha. Meanwhile, Revenue Minister R. Ashok has informed the Chief Minister that three councillors were suspected to have been involved in the riots. He made the revelation in presence of Pulikeshinagar legislator Murthy, with whom he held talks at the Vidhan Soudha.

Pulikeshinagar assembly constituency has seven municipal wards: Pulikeshinagar, SK Garden, Sagayapuram, Muneshwara Nagar, Devarajeevana Halli, Kaval Byrasandra and Kushal Nagar. Ashok asserted that the government will "smoke the rioters out of their holes". "The accused will be smoked out of their holes. We will barge into their homes, enter the streets and get to all the corners where they are hiding. We will find all of them," he said.

Home Minister Basavaraj S. Bommai said that the government will recover the loss incurred from those people responsible for the vandalism and arson. "One of the important announcements I want to make is that the recovery of loss, as per Supreme Court directions, should be recovered from the persons behind the incident. That action we are going to take immediately," he said.

Meanwhile, Murthy, whom the rioters targeted, said the vandals were outsiders and not from his constituency and sought security. He noted that if a legislator becomes the target in a riot, then what would happen to others.

Tourism Minister C.T. Ravi said the riots were planned, and some suspected rioters have been identified, and will be confirmed by the investigation. He also said the government will recover damages from rioters like how it was done in Uttar Pradesh. Meanwhile, to cool frayed tempers, city Police Commissioner Kamal Pant is expected to hold a peace meeting with community leaders in which Murthy is also expected to take part.

(The above story first appeared on LatestLY on Aug 12, 2020 11:52 PM IST. For more news and updates on politics, world, sports, entertainment and lifestyle, log on to our website latestly.com).