The Karnataka High Court on Monday struck down provisions of the Karnataka Police (Amendment) Act, 2021 that banned online games. 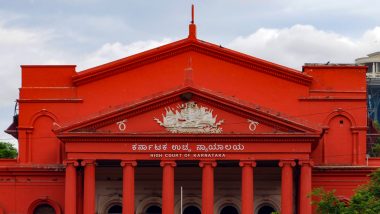 The bench said in its order that in the 'Karnataka Act number 28/2021 to the extent the provisions, (not the entire Act) declared to be ultra vires to the Constitution of India and struck down. The consequences of striking down the provisions shall follow.'

"However, nothing in this judgment shall be construed to prevent an appropriate legislation be brought about concerning the subject i.e; betting and gambling in accordance with the provisions of the constitution. A writ of mandamus is issued restraining the respondents from interfering with online gaming business and allied activities of the petitioners," the order said.

The Karnataka Police (Amendment) Bill, 2021 was mooted by ruling BJP to amend the Karnataka Police Act 1963, in the Monsoon session. The BJP leaders claimed that they were introducing the Bill to ban online gaming in the interest of people. The law included all forms of wagering or betting in connection with any game of chance barring horse racing. However, the new law was opposed by online gaming companies and it was said that the policy would affect the prospectus of the city which is emerging as a hub of online gaming companies.

The new Act banned all formats of online games involving wagering, betting and gambling of all nature and forms in the state. Under the new legislation, online gaming was considered a non-bailable offence with a fine of Rs 1 lakh and imprisonment up to three years. Along with banning games of skills, the government had also categorised online games using electronic means and virtual currency, electronic transfer of funds in connection with any game as gambling. Karnataka HC Says, "We Are Considering the Issue of Whether the Wearing of Headscarf Comes.

The new legislation was passed in the Monsoon session by both the Houses of the legislature in Karnataka. Mobile Premier League (MPL) was one of the first companies to stall its operations in Karnataka. Paytm First Games was also locked. The online gaming companies moved to the court questioning the new legislation. Similar law was also challenged in Tamil Nadu and online gaming operators got relief against the government order from the High Court. Centre Issues Advisory To Parents, Teachers On Children’s Safe Online Gaming.

The Internet and Mobile Association of India (IAMAI) had stated that the new legislation by the government will dent the image of Karnataka as a startup hub and the state exchequer will see a huge revenue deficit. It also maintained that with the new legislation offshore gamblers will flourish. Sources say that the state has more than 100 gaming companies with a workforce of 4,000.

(The above story first appeared on LatestLY on Feb 14, 2022 02:58 PM IST. For more news and updates on politics, world, sports, entertainment and lifestyle, log on to our website latestly.com).