Congress leader Lakhan Jarkiholi, who is the youngest brother of former Karnataka Minister and Sleaze CD case accused Ramesh Jarkiholi, on Thursday demanded that state Congress chief D.K. Shivakumar must also resign on moral grounds as his name too is often being linked with the case. 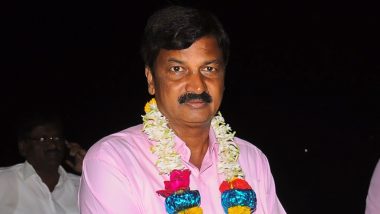 Talking to reporters on the sidelines of the election campaign of his brother and Congress state Working President Satish Jarkiholi who is contesting the Belgaum Lok Sabha seat bypoll, Lakhan Jarkiholi said that Shivakumar should also resign or the party high command must intervene and ask him to step down. "On a mere allegation, my brother, Ramesh, was asked to resign. Nothing is proved yet. In the same manner, Shivakumar's name too is cropping up too often in this (Sleaze CD) case, so he too should resign," he said. Karnataka Sex Tape Scandal: Karnataka HC Allows Woman to Record Statement in Court.

Lakhan Jarkiholi also said that a template has been set now, and if someone wants to malign anyone, they can release a 'fake CD' and ensure that not only someone's post, but their peace of mind and honour is snatched away. "This will be the norm. Mark my words, whoever is behind all of this, will pay a heavy price. They will undergo the same pain that we (the Jarkiholi family) are going through now," he said. Karnataka Sex Tape Scandal: Allegations Against Ramesh Jarkiholi False, He’ll Campaign for Us, Says CM BS Yediyurappa.

Replying to a question, he said that if the woman's parents are making allegations against Shivakumar, then these must be true. "It is very rare to see a common man taking the name of a highly influential person's name in such cases. If that woman's parents are saying it, then it must be fact," he said. He emphasised that none in the Jarkiholi family have ever run away and Ramesh Jarkiholi too will not run away.

"We brothers set aside all our differences when it comes to the matter of our family's reputation. We all are with Ramesh. We are fighting hard, there is no denying about it. He is in Karnataka itself. Media should not speculating that our brother has run away," he said.

(The above story first appeared on LatestLY on Apr 02, 2021 08:57 AM IST. For more news and updates on politics, world, sports, entertainment and lifestyle, log on to our website latestly.com).