The incident took place at the exhibition center of Malekallu Tirupathi Hill. This 300-year-old sacred place is known as Chikka (mini) Tirupathi. 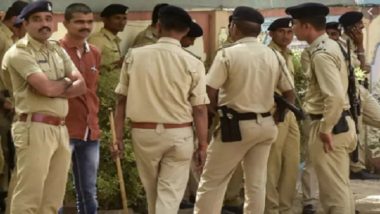 Hassan, May 31: Tension gripped the Arasikere taluk in Karantaka's Hassan district on Tuesday after the vandalisation of idols in a temple by miscreants. The incident took place at the exhibition center of Malekallu Tirupathi Hill. This 300-year-old sacred place is known as Chikka (mini) Tirupathi. The temple is located 2-km away from the Arasikere town atop a hill and is revered by the people in the region.

According to police, at least four miscreants vandalised the idols which were ready for installation. The police said the miscreants, who came to the premises of the temple on Monday, swam in the Kalyani (sacred water body of temple). They also smoked despite objections and threatened and chased away the labourers working in the premises. Uttar Pradesh: Three Ambedkar Statues Vandalised in Azamgarh.

Later, they went to the exhibition center and vandalised the idols which were ready for installation and some were under construction to be set up in the temple premises. The miscreants used rods and other equipment to break idols. Considering the sensitivity of the matter, District Superintendent of Police R. Srinivas Gowda and senior officers in the district rushed to the spot. Dog squad and fingerprint experts collected the clues on miscreants.

After the news spread, Hindu activists and hundreds of people gathered in the temple premises. The police have beefed up the security in the premises and also was keeping vigilance in Arasikere taluk. Further investigation is on.

(The above story first appeared on LatestLY on May 31, 2022 10:00 AM IST. For more news and updates on politics, world, sports, entertainment and lifestyle, log on to our website latestly.com).