The Gujarat government has now been directed to replace the Gujarati expression with "Namaste President Trump". 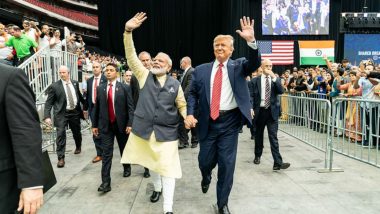 New Delhi, February 16: During his two-day visit to India starting February 24, US President Donald Trump is scheduled to hold an event in Ahmedabad similar to Prime Minister Narendra Modi’s successful "Howdy, Modi!" in Houston last September. Initially, it was reported that the event will be touted as "Kem Chho Trump". However, the Gujarat government has now been directed to replace the Gujarati expression with "Namaste President Trump". Donald Trump India Visit: US President's Three-Hour Stay in Ahmedabad to Cost Gujarat Exchequer Rs 100 Crore, Says Report.

According to a report, a slew of directives has been issued to the Gujarat government, including to display "Namaste" as traditional Indian welcome on all communication material. The word "Kem Chho" is replaced with "Namaste" in a bid to give the event national flavour. "The government of India has informed us about the ‘Namaste President Trump’ theme and all campaign materials will be as per the Centre’s directions," state chief secretary Anil Mukim told TOI. Is Donald Trump 'Number 1' And Narendra Modi 'Number 2' on Facebook? Fact-Check of US President's Claim Ahead of His India Visit.

While the central government aims to project Trump's event as a massive national show, "Kem Chho Trump" theme had a regional flavour. "A Gujarati label for Trump’s first event in India would not have been appropriate. Moreover, 'namaste' is understood as an Indian greeting across the world," a government official was quoted as saying. On billboards, placards and hoarding, pictures of Trump and First Lady Melania Trump will be used.

Trump and Modi had shared the dais in Houston at the 'Howdy Modi' event that was attended by over 50,000 strong Indian diaspora. The duo is scheduled to hold a roadshow from the Ahmedabad airport and visit Sabarmati Ashram to pay tribute to Mahatma Gandhi on February 24. Later, Trump will inaugurate the Sardar Patel Stadium where he will hold "Namaste Donald Trump" event.

(The above story first appeared on LatestLY on Feb 16, 2020 10:44 AM IST. For more news and updates on politics, world, sports, entertainment and lifestyle, log on to our website latestly.com).