Is Donald Trump 'Number 1' And Narendra Modi 'Number 2' on Facebook? Fact-Check of US President's Claim Ahead of His India Visit

US President Donald Trump, ahead of his trip to India, described himself as "number 1" and Prime Minister Narendra as "number 2" on Facebook, quoting Mark Zuckerberg. Here's the truth. 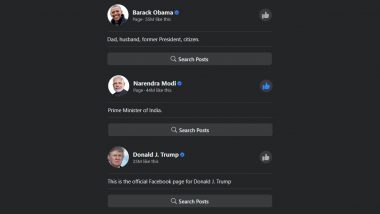 New Delhi/Washington, February 16: US President Donald Trump on Saturday described himself as "number 1" and India's Prime Minister Narendra as "number 2" on Facebook, claiming that Mark Zuckerberg had said it so. In a tweet, Donald Trump wrote: "Great honor, I think?  Mark Zuckerberg recently stated that "Donald J. Trump is Number 1 on Facebook. Number 2 is Prime Minister Modi of India."." Trump added that he was looking forward to visiting India. However, it is hard to believe that Trump is "number 1" on Facebook.

The fact is it is not Donald Trump who has the highest number of followers on Facebook among political personalities. It is also a fact that former US President Barack Obama has more followers on Facebook than Trump. Moreover, Prime Minister Narendra Modi is far ahead in the race. While Trump has 25 million followers, Obama has 55 million. As many as 44 million Facebook users follow PM Modi. As facts remain that other political figures' accounts have more followers than Trump, it is a false claim that the US President is "number 1". Donald Trump India Visit: US President's Three-Hour Stay in Ahmedabad to Cost Gujarat Exchequer Rs 100 Crore, Says Report.

Here Are Some Tweets Debunking Donald Trump's 'I Am Number 1' Claim:

And here it is... pic.twitter.com/GuMxD4Cww2

70% of your followers are fake LOL pic.twitter.com/zerGRY4BGx

This is not the first time that Trump has claimed to be number one on Facebook. A month ago, he claimed Facebook CEO Mark Zuckerberg has offered him congratulations for being "number one" on social networking site. Trump and first lady Melania Trump are scheduled to visit India on February 24-25. This will be Trump's first visit to India as US President.

Donald Trump is number 1 and Narendra Modi number 2 on Facebook.

This is a false claim. Many such as Barack Obama and Narendra Modi have more followers than Donald Trump.

(The above story first appeared on LatestLY on Feb 16, 2020 09:56 AM IST. For more news and updates on politics, world, sports, entertainment and lifestyle, log on to our website latestly.com).