Kerala Chief Minister Pinarayi Vijayan Not to Do a Joe Biden, Intends to Rely on Technology to Run Govt From Hospital

Chief Minister Pinarayi Vijayan has dropped enough hints that he does not intend to do a 'Joe Biden' and instead will rely on technology to run his government in remote control mode from a hospital bed in the US. 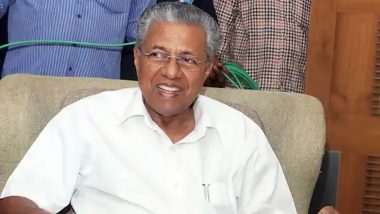 Thiruvananthapuram, Jan 14: Chief Minister Pinarayi Vijayan has dropped enough hints that he does not intend to do a 'Joe Biden' and instead will rely on technology to run his government in remote control mode from a hospital bed in the US.

Vijayan is leaving to the US along with his wife and his personal assistant on Saturday and will return only on January 29.

Biden, in November last year, for a brief while had officially handed over power to vice-president Kamala Harris when he underwent a colonoscopy examination. Makaravilakku Photos & Makara Jyothi 2022 Live Stream Video Clips From Sabarimala Temple in Kerala Take over Twitter as Devotees Offer Prayers at Lord Ayyappa Temple.

During Wednesday's Cabinet meeting which Vijayan attended virtually from Kozhikode, he informed his colleagues that the next Cabinet will be held on January 19, giving enough hints that he does not wish to handover charge to any of his colleague.

Incidentally, the last time when he went for his medical treatment, he had handed over charge to E.P.Jayarajan, the de-facto number two in his then cabinet (2016-21).

With regards to checking up on files, technology will be coming to his help as barring secret files, today in the State Secretariat, the seat of power in the state capital has by now adopted the e-file system, where any official with the correct authorisation can log on to any of the e-files.

In the new Vijayan Cabinet after he retained office through a swashbuckling electoral win in the April 2021 Assembly polls, Vijayan sprang a huge surprise when he failed to induct K.K.Shailaja- the health minister who had won accolades in the way the Covid pandemic was handled till April 2021, in his new cabinet.

When many thought either M.V.Govindan or K.Radhakrishnan (both central committee party members of the CPI-M) would be given the charge officially, Vijayan's announcement about that the next cabinet meeting implie he does not wish to do a Jose Biden.

(The above story first appeared on LatestLY on Jan 14, 2022 07:49 PM IST. For more news and updates on politics, world, sports, entertainment and lifestyle, log on to our website latestly.com).