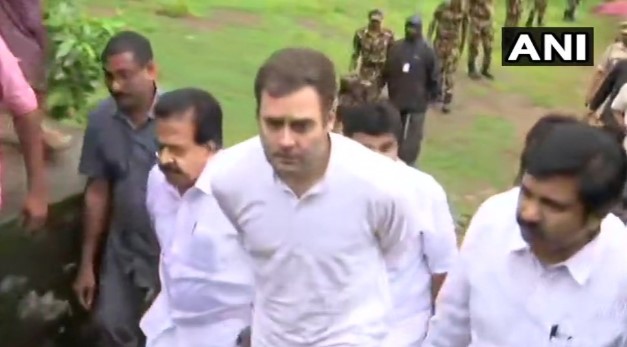 Wayanad, August 11: Indian National Congress leader Rahul Gandhi arrived in Kerala on Sunday afternoon and proceeded to a relief camp in Boodanam Church in Nilambur. He also met the people affected in floods and talked with them. He also asked them in detail about their houses and situation and assured them help. The Wayanad MP is in his Lok Sabha constituency to review the flood situation. Rahul Gandhi to Review the Situation in Flood Affected Wayanad.

Kerala: Rahul Gandhi reaches at a relief camp in Boodanam Church in Nilambur, Malappuram and meets flood-affected people. He is in his Lok Sabha constituency, Wayanad, to review the flood situation. pic.twitter.com/YDOJd4igoC

"For the next few days, I will be based in my Lok Sabha constituency, #Wayanad that has been ravaged by floods. I will be visiting relief camps across Wayanad and reviewing relief measures with District & State officials," Gandhi tweeted earlier.

On Friday, Congress leader said that he had talked to Prime Minister Narendra Modi about the assistance for the people affected by floods. "The PM has assured to provide any assistance required to mitigate the effects of the disaster," Gandhi tweeted.