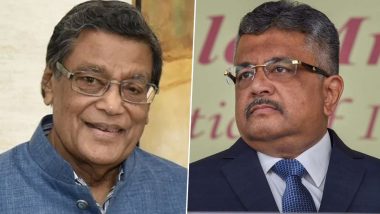 New Delhi, June 29: President Ram Nath Kovind on Monday approved the re-appointment of KK Venugopal as Attorney General for India for one year with effect from July 1, 2020. Meanwhile, Tushar Mehta has also been retained as the Solicitor General of India.  The Appointment Committee on Monday gave its nod to the re-appointment of Tushar Mehta with effect from July 1, 2020. Mehta has been re-appointed for three years.

Venugopal, succeeded Mukul Rohatgi as the AG on June 30, 2017. Mehta was first appointed as Solicitor General in October 2018. Mehta's appointment as the Solicitor General came almost a year after the post fell vacant, with the resignation of then SG Ranjit Kumar on October 20, 2017.

(The above story first appeared on LatestLY on Jun 29, 2020 11:21 PM IST. For more news and updates on politics, world, sports, entertainment and lifestyle, log on to our website latestly.com).