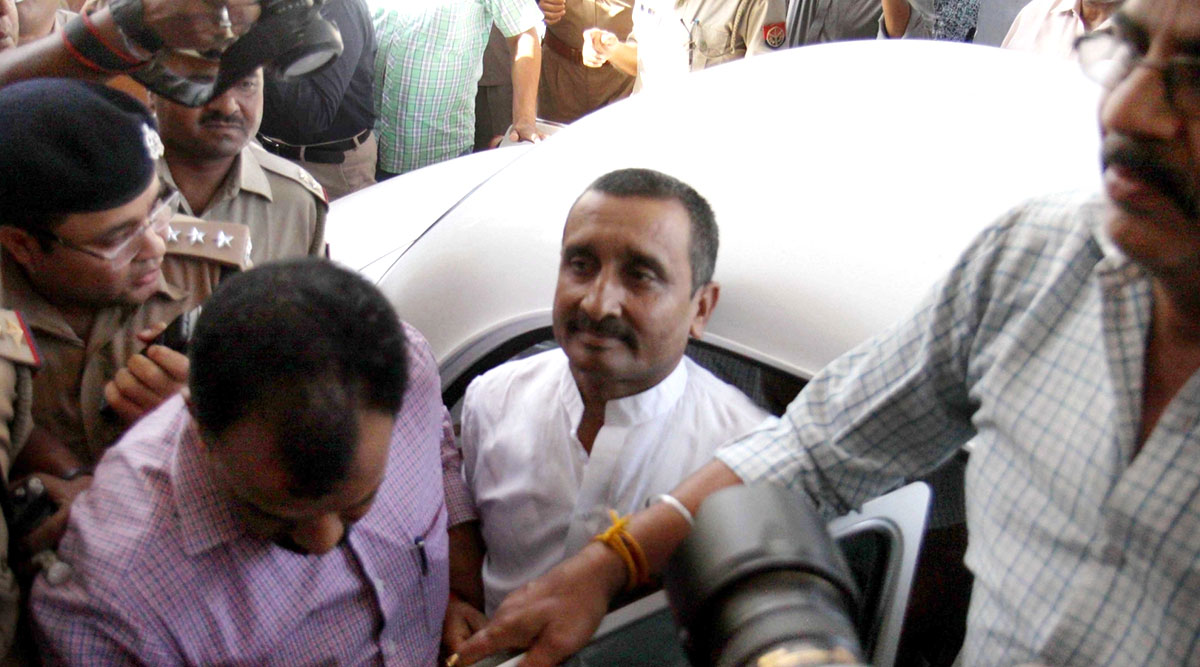 Lucknow, December 20: Delhi's Tis Hazari Court on Friday awarded life imprisonment to expelled BJP MLA Kuldeep Singh Sengar in connection with the Unnao rape and abduction case. In its verdict, the Court  has also ordered Senger to pay a compensation of Rs 25 lakhs to the victim and has ordered the CBI to assess threat perception and offer the necessary protection to the victim and her family. The CBI has also been directed to provide safe house to victim and her family. Reports inform that Sengar was in tears and broke down in Court after the verdict.

During the hearing, the judge said that he doesn't find any mitigating circumstances. Meanwhile, CBI Prosecutor Ashok Bhartendu pressed for maximum punishment and argued against showing any leniency, a report by Live Law stated. The Court also slammed the CBI for the delay of over one year in filing the chargesheet after taking up the investigation from Uttar Pradesh Police in April 2018. Unnao Rape Survivor Says 'Kuldeep Singh Sengar Engineered the Crash to Kill Her'.

On Tuesday, the court had adjourned the hearing on the quantum of punishment of Sengar till December 20 and had sought a copy of the affidavit filed by him in 2017 before the Election Commission. Senger, a four-time Bharatiya Janata Party (BJP) MLA from Bangermau in Unnao district, was expelled from the party in August this year after he was found guilty by a court for raping a minor girl in Uttar Pradesh’s Unnao district in 2017.

The Central Bureau of Investigation (CBI) also sought maximum punishment for Sengar. It demanded adequate compensation for the rape survivor. However, Sengar’s lawyers sought minimum punishment from the court.  Sengar is currently lodged in Tihar Jail in Delhi for alleged connection in the case. Kuldeep Singh Sengar Convicted in Unnao Rape-Kidnapping Case by Tis Hazari Court.

Going by the chronology of events, on August 8, the Tis Hazari court of Delhi had framed charges in the case of rape of a minor girl in Unnao in 2017. In a a charge sheet filed by the CBI on October 3, it was revealed that the rape survivor was allegedly kidnapped and raped for nine days at different places by three persons that year.

On July 28, the Unnao rape survivor and her lawyer were severely injured after the car in which she was travelling was hit by a truck. Two of her aunts were killed in the accident and she and her lawyer were critically injured. Reports inform that the family alleged foul play in the accident. According to reports, the court had also observed that the accused carried out a series of acts to detain and silence him so that he does not pursue his complaint.

On August 8, the Delhi Court had framed charges against the Sengar and Shashi Singh under Sections 120 B (criminal conspiracy), 363 (kidnapping), 366 (kidnapping or inducing a woman to compel for marriage), 376 (rape) of the IPC and other relevant sections of the POCSO Act.