LCA Tejas Mark II to be Unveiled in 2022 on 75th Independence Day: Reports 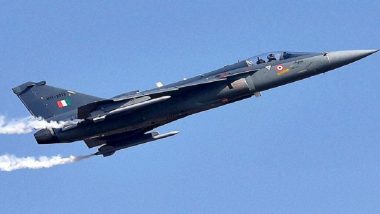 According to a report Published in Hindustan Times, the manufacturing of the aircraft will start by 2025-2026. The ADA had finalised the design in December 2018. By the end of this year, the design of the fifth-generation twin-engine stealth fighter will be locked in.

According to ADA officials, the Mk II will have the same weight as the Mirage, Jaguar and Grippen. However, the aircraft will have a heavier GE 414 engine than these warplanes. The Tejas Mk II will reportedly be equipped with state-of-the-art AESA radar and indigenously developed air-to-air missile Astra. Air Chief Marshal BS Dhanoa Slams HAL For Delay in Production of Tejas Aircraft, Says 'Only10 Out of 20 Jets Delivered Till Now'.

Meanwhile, LCA Tejas aircraft received its final operational clearance (FOC) during the Aero India 2019 which was held in Bengaluru last month. The FOC Certificate and Release to Service Document (RSD) were handed over to the Chief of Air Staff Air Chief Marshal BS Dhanoa on the opening day of Aero India 2019.

(The above story first appeared on LatestLY on Aug 23, 2019 09:53 PM IST. For more news and updates on politics, world, sports, entertainment and lifestyle, log on to our website latestly.com).