Lieutenant General Anindya Sengupta on Wednesday took over command of ‘Fire and Fury Corps' from Lt Gen P.G.K. Menon, officials said. The officer has had a distinguished career in the Indian Army, serving in a number of important command and staff appointments. 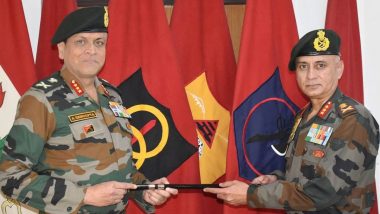 Prior to assuming command of Fire and Fury Corps, he was serving as the Director General of Strategic Planning in New Delhi. "In his farewell message, Lt Gen Menon conveyed his gratitude and deep appreciation to all ranks of the Corps for their professionalism and steadfast dedication in the service of the nation, even in the most hostile terrain, weather and altitude challenges, faced by any Army in the world," The army said. Fire and Fury Corps Restarts Hydrotherapy at Demchok's Hot Spring.

"On taking over, Lt Gen Sengupta exhorted all ranks of Fire and Fury Corps to continue to discharge their duties with the same commitment and zeal and always be prepared to deal with any threat to national security. He urged them to continue to keep ‘nation first' in all their endeavours," the army.

(The above story first appeared on LatestLY on Jan 05, 2022 09:34 PM IST. For more news and updates on politics, world, sports, entertainment and lifestyle, log on to our website latestly.com).