The incident took place at the Automated Teller Machine (ATM) of a nationalised bank in Simaria town, about 60 km from the district headquarters. 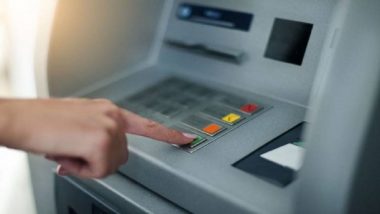 Panna, July 19: Two persons stole over Rs 22 lakh from an ATM after blowing it up with explosives in Madhya Pradesh's Panna district in the wee hours of Sunday, police said. They held the ATM's guard at gunpoint while committing the robbery, the police said.

"Two unidentified motorcycle-borne persons robbed a State Bank of India (SBI) ATM at around 2 am today after blowing it up using explosives, Superintendent of Police Mayank Awasthi told reporters.

He said according to bank officials, the ATM had Rs 22 lakh to Rs 23 lakh, which the robbers took away. "We have started a search operation to nab the robbers and will arrest them soon, the official said.

The ATM's guard, Sukhendra Choudhary, told reporters that two persons, who arrived on a black motorcycle at around 2 am, pushed him and one of them later held him at gunpoint before they blew up the machine.

They then fled with the money, he said.