Police in Uttar Pradesh's Meerut have launched an investigation into alleged derogatory and inciteful remarks passed by one Swami Anand Swaroop against Muslims and Christians. 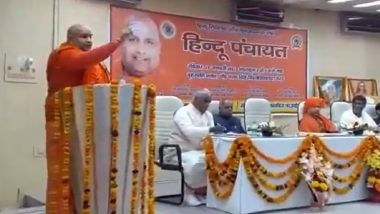 Meerut, January 13: Police in Uttar Pradesh's Meerut have launched an investigation into alleged derogatory and inciteful remarks passed by one Swami Anand Swaroop against Muslims and Christians. The probe was launched after videos of Swami Anand Swaroop calling for a social and economical boycott of Muslims and urging Hindus to set up a "military" emerged on social media. Uttar Pradesh: Meerut Man Kills Sister After Tiff over Pet Dogs.

The videos were uploaded by Asif Khan. Sharing Swaroop's video, Khan tweeted: This happened at CCS university, Meerut. This Hindutva guy is Swami Anand Swaroop, he is openly targeting Muslims and Christians. He says "One who reads Quran becomes beast", He also asked for economic boycott of Muslims. "Hindu Republic of Hindsutan" written on banner (sic)." He also shared another video in which Swaroop is talking equipping one crore Hindus with swords.

"We want a military comprising one crore Hindu youths who will be ready with swords," the Hindu religious figure can be heard saying in the video. A Twitter used asked the Uttar Pradesh Police if they would book Swaroop under the National Security Act. In response, the official Twitter handle of the Meerut police said the cyber cell has been directed to conduct an inquiry and take necessary action.

(The above story first appeared on LatestLY on Jan 13, 2021 09:03 AM IST. For more news and updates on politics, world, sports, entertainment and lifestyle, log on to our website latestly.com).