Meerut Twin Brothers Lose Battle To COVID-19, Die Hours Apart From Each Other

The twins named Joefred and Ralfred born minutes apart caught the deadly fever on 23rd April and on May 1, both were admitted to hospital after their oxygen levels began dropping, and had to be eventually put on ventilator support in the ICU. 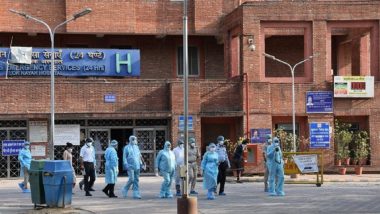 Meerut, May 18: In a heart-wrenching story, twin brothers from Meerut died last week within a span of 24 hours due to the COVID-19 complications. The twins named Joefred and Ralfred, born minutes apart, caught fever on April 23. Since then, they were in the same hospital and their parents expected them to return soon after they tested negative for COVID-19 on May 10. But with their struggle with Covid-19, both succumbed to the virus and died hours after one another last week. They died on May 13 and May 14, hours apart.

The Indian Express reported that the brothers developed a fever on April 23, which lasted several days. As their condition deteriorated, around May 1, both were admitted to Anand Hospital after their oxygen levels began dropping, and had to be eventually put on ventilator support in the ICU. After the deaths, the family has been holding prayer meetings, seeking to find strength. However, both the parents say their faith in almighty has been shaken as their sons did not deserve this.  India Reports Highest COVID-19 Fatalities in 24 Hours As 4,329 People Die in A Day; Daily Coronavirus Cases Down to 2,63,533.

Parents Gregory Raymond Raphael and wife Soja, both are from Kerala and settled in Meerut as teachers at St Thomas School. They recalled that their sons were inseparable. The twins pursued B Tech together and secured placements in Hyderabad. While Joefred worked in Accenture, Ralphred was working with Hyundai Mubis Company. Joefred had been in Meerut for a while, working from home due to COVID-19, while Ralphred had come on leave from his Hyderabad office due to an arm injury.

The family is a resident of Meerut’s Cantonment area, and they initially treated them at home. But as their oxygen levels dropped, both of them were admitted to the hospital for treatment. The first report of the brother confirmed COVID-19, but after few days the second test came negative, thus, doctors were planning to move them from the COVID-19 ward to the normal ICU. Parents requested the doctors to monitor both in COVID-19 ward for two more days before moving them. Then, suddenly, on the evening of May 13, the news of demise of one son came in followed by the death of other son hours after.

(The above story first appeared on LatestLY on May 18, 2021 11:30 AM IST. For more news and updates on politics, world, sports, entertainment and lifestyle, log on to our website latestly.com).