Monsoon 2020: Three Trains Diverted After Portion of a Tunnel Collapses in Goa 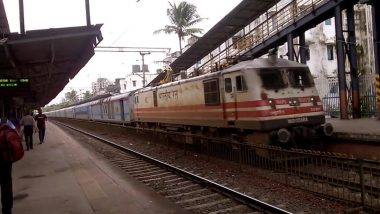 Panaji, Aug 6: Three passenger trains, including the Delhi-Goa Rajdhani Express have been diverted, after a small portion of a tunnel at Pernem village in Goa collapsed on Thursday morning following heavy rains, an official said.

"A five-meter portion of the tunnel wall in Pernem village collapsed due to heavy rains on Thursday morning. As a result, three trains have been diverted via Panvel, Londa and Pune," a Konkan Railway spokesperson said. Thane Rains: Dr Vipin Sharma, Thane Municipal Commissioner, Appeals People to Remain Indoors After City Receives 149 mm Rainfall in Past 24 Hours.

The incident occurred at around 11.15 a.m., the official also said.

The trains which have been diverted on account of the track blockage are the Rajdhani Express and the Mangala Express (Delhi to Goa) and the Mumbai to Kerala Netravati Express.

(The above story first appeared on LatestLY on Aug 06, 2020 01:00 PM IST. For more news and updates on politics, world, sports, entertainment and lifestyle, log on to our website latestly.com).