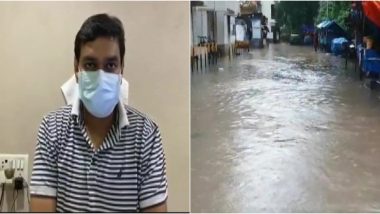 Thane, August 6: With continuous downpour for the past couple of days, Thane district in Maharashtra received 149 mm rainfall on August 5. Thane municipal commissioner Dr Vipin Sharma appealed to the residents to not step out of houses unnecessarily. He also stated that the administration is alert and all emergency services are on the field.

Among other things, Dr Vipin Sharma also said that the India Meteorological Department has issued a red alert for Thane. Following the continuous rains, several areas in Thane were waterlogged and traffic movement was paralysed. Thane witnessed heavy rainfall in the last 3 days with 148 mm rainfall recorded on August 4.

Informing about the weather conditions, the IMD stated that rainfall would continue for the day in Mumbai and suburbs, which will be accompanied with strong winds reaching 60-70 kmph occasionally gusting to 80 kmph. IMD even issued thunder/lightning in some areas and asked people to remain cautious.

Meanwhile, Prime Minister Narendra on Wednesday spoke to Maharashtra Chief Minister Uddhav Thackeray over the prevailing situation in Mumbai and adjoining areas due to heavy rains and strong winds. PM Modi assured Thackeray of all possible support to combat the situation.

(The above story first appeared on LatestLY on Aug 06, 2020 11:15 AM IST. For more news and updates on politics, world, sports, entertainment and lifestyle, log on to our website latestly.com).