Mumbai: Doctors Remove Over 7000 Gallstones From Woman’s Bladder After She Complains of Stomach Pain

During laparoscopy, the doctors removed the stones in an operation that went on for about 40-minute. Surprisingly, it took the nurses around 4 hours to count the stones. 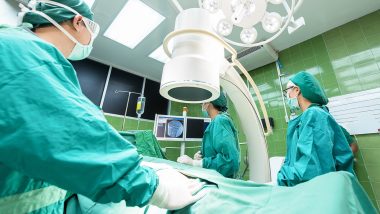 Mumbai, September 24: In what could be seen as a bizarre and complex case, a total of 7,228 gallstones were removed from a woman resident of Mira Road. According to reports, the incident came to light after the 43-year-old woman ignored her stomach pain for two years thinking of it as acidity and gas issues. When the pain did not stop, her doctor advised her to take a sonography test.

Acting on the doctor's advice, the woman underwent sonography which revealed that there were several stones in her gallbladder. Following this, the woman underwent surgery on August 23. The doctors performed a laparoscopy on the woman at the Bhaktivedanta Hospital. Laparoscopy, which is also known as keyhole surgery is a medical procedure that allows surgeons to access the inside of the abdomen and pelvis without having the need to make large incisions. Homosexuality at Display in Gir National Park, Two Male Lions Spotted Having Sex.

During laparoscopy, the doctors removed the stones in an operation that went on for about 40-minute. Surprisingly, it took the nurses around 4 hours to count the stones. If reports are to be believed, the stones removed by doctors are the largest amount of gallstones that have been surgically removed from a single patient in the country. Back in 2017, over 5,000 gallstones were removed from a 45-year-old resident of Rajasthan's Kota.

Speaking to Mid-day, Dr. Bimal Shah said, "The patient had been experiencing pain in her gallbladder for years. During her sonography, I found big stones and her gallbladder had blockages due to this. I had removed around 2,300 gallstones from an individual but I found out that this patient had even more stones. In India, the previous record was 5,000 gallstones, but this is the new record."

The doctor also cautioned people to not mistake stomach pain for gas or acidity and suggested to visit a doctor. The doctor also said to do sonography if the pain is constant.

(The above story first appeared on LatestLY on Sep 24, 2022 10:48 PM IST. For more news and updates on politics, world, sports, entertainment and lifestyle, log on to our website latestly.com).