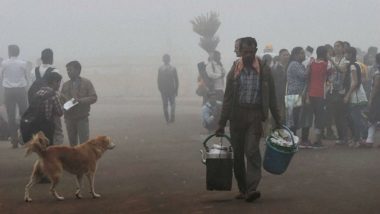 Mumbai and around continued to remain cool on the second day morning too, with min temp being recorded below 15 Deg C at most of the places.

Its good sunny Saturday with chill in.

On Friday, Mumbai recorded the lowest minimum temperature in the month of January in the last 7 years since 2013. According to a report by Hindustan Times, the Santacruz weather station, recorded 11.4 degrees Celsius on Friday. The temperature in the city was six degrees below normal. Meanwhile, the Colaba observatory recorded 14.5 degrees Celsius, which is  3.1 degrees below normal. Dense Fog Continues to Engulf Delhi and Parts of North India, Air, Train and Road Traffic Affected.

The India Meteorological Department (IMD) had predicted earlier this month that mercury levels are likely to dip below normal. However, the minimum temperatures on Friday morning fell to record lows of 11.4 degrees Celsius. In Mumbai, the lowest minimum temperature for the month of January was recorded on January 22, 1962, at 7.4 degrees Celsius. The weather agency has predicted some respite from the winter chills from Sunday. The IMD said the temperatures are likely to see a marginal rise from Sunday onwards.

(The above story first appeared on LatestLY on Jan 18, 2020 02:10 PM IST. For more news and updates on politics, world, sports, entertainment and lifestyle, log on to our website latestly.com).