The NSA said 100 percent land line connections are operational in the state and people there see greater opportunities, future, economic progress and employment. Doval informed that 92.5 percent of the geographical area of Jammu and Kashmir is free of restrictions. 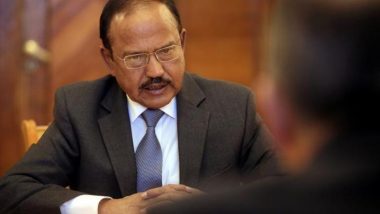 New Delhi, September 7: National Security Advisor (NSA) Ajit Doval on Saturday said he is totally convinced that majority of Kashmiris support the abrogation of article 370, which granted special status to Jammu and Kashmir. The NSA said 100 percent land line connections are operational in the state and people there see greater opportunities, future, economic progress and employment. Doval informed that 92.5 percent of the geographical area of Jammu and Kashmir is free of restrictions.

Briefing about the situation in the state, Doval said that out of 199 police station areas in J&K, only 10 have prohibitory orders in place, while the rest have no restrictions. "I am totally convinced that majority of Kashmiris support the abrogation of article 370 , they see greater opportunities,future, economic progress and employment opportunities ,only a few miscreants are opposing it", Doval said. Article 370 Scrapped in Kashmir: Forces on Alert, NSA Ajit Doval Expected to Visit Valley.

Doval informed that 230 Pakistani terrorists were spotted, some of them have infiltrated while some have been arrested. He said Pakistan is trying to create trouble in India. He further informed that Pakistan is indulging in false and black propaganda and some uninformed people are taking one or two incidents as public opinion. The NSA said that the government is determined to protect life of Kashmiris from Pakistani terrorists, even if it has to impose restrictions. He added saying that terror is the only instrument Pakistan has to create unrest.  Article 370 Revoked, Jammu and Kashmir Bifurcated Into Two Union Territories.

"There are Pakistani communication towers 20 kilometers along border ,they are trying send messages, we heard intercepts, they were telling their men here 'how so many apple trucks are moving, can’t you stop them? Should we send you bangles?'", he said. "No question arises of Army atrocities and only state J&K Police and some central forces are handling public order", he said, adding that the Indian army is there to fight terrorists.

While speaking on the detention of political leaders in J&K, Doval said everything is done according to the framework of law, they can challenge their detention in Court. "None of them(J&K political leaders) have been charged with criminal offence or sedition, they are in preventive custody till environment is created for democracy to function, which I believe may happen soon", he added.

Doval recently spent around a month in the Valley amid the security lockdown. Article 370, which gave special status to the region, was scrapped on August 5. The resolution was later passed by the Parliament and got President's nod.  The region, now has been bifurcated into two Union Territories- Jammu and Kashmir with an Assembly and Ladakh without one- has been under the strict vigil of security forces and restrictions have been imposed there.

(The above story first appeared on LatestLY on Sep 07, 2019 01:24 PM IST. For more news and updates on politics, world, sports, entertainment and lifestyle, log on to our website latestly.com).