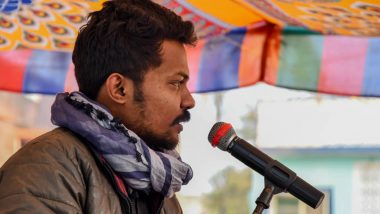 Delhi/Lucknow, August 18: The Uttar Pradesh Police on Tuesday arrested freelance journalist Prashant Kanojia from his Delhi residence over a social media post about Ayodhya's Ram Temple and President Ram Nath Kovind. The FIR was lodged in Lucknow Police Commissionerate's Hazratgunj Police Station alleging that Kanojia reportedly made a comment that divides people on the basis of caste or religion.

According to the FIR, Kanojia had posted a tweet on Ram Mandir and President Kovind on August 16 which may spoil the peace in the region. He was booked under section various sections of IPC including -- 153-A, 153-B, 420, 465, 468, 469, 500, 505 (1) (b), 505 (2) and 66. The complaint was lodged by one Dinesh Kumar Shukla on Monday against Kanojia for the spurious post. Apart from this, the Uttar Pradesh Police also booked Kanojia on charges of inciting people and spreading riots through fake news. Uttar Pradesh Police Officer Asks 16-Year-Old Girl to Dance Before Filing FIR.

Earlier too, the freelance journalist was also booked by UP Police on June 8, 2019, for a social media post in which wrote against state Chief Minister Yogi Adityanath. However, he was later released from jail on June 11, 2019, after the Supreme Court order.

(The above story first appeared on LatestLY on Aug 18, 2020 04:12 PM IST. For more news and updates on politics, world, sports, entertainment and lifestyle, log on to our website latestly.com).