In a freak accident, a speeding container truck rammed into 48 vehicles on a Pune road on Sunday, leaving at least three people injured, police said. 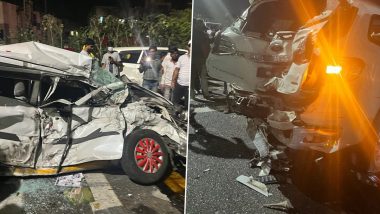 The incident occurred at the busy Navale Bridge around 8.30 pm., leading to traffic chaos across the city. Bihar Road Accident: 7 Children Dead, Several Feared Injured After Truck Rams Into Roadside Settlement in Vaishali.

A container, with a suspected brake failure, rammed into the vehicles on the road, stopping all traffic on both sides.

A major accident occurred at Navale bridge on the Pune-Bengaluru highway in Pune in which about 48 vehicles got damaged. Rescue teams from the Pune Fire Brigade and Pune Metropolitan Region Development Authority (PMRDA) have reached the spot: Pune Fire Brigade pic.twitter.com/h5Y5XtxVhW

As per preliminary information, at least 3 persons sustained injuries in the accident. Uttar Pradesh: Woman, Whose Body Was Found Stuffed in Suitcase in Mathura, Identified As Delhi’s Badarpur Resident; FIR Lodged.

Fire Brigade, Pune Police and rescue teams rushed to the scene of the accident to clear the bridge of the vehicles, many damaged badly.

The fire brigade also sprayed water to clear the bridge of oil and petrol leaking from the vehicles hit by the container truck.

(The above story first appeared on LatestLY on Nov 21, 2022 12:00 AM IST. For more news and updates on politics, world, sports, entertainment and lifestyle, log on to our website latestly.com).