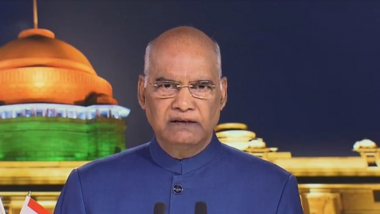 New Delhi, August 5: President Ram Nath Kovind on Wednesday congratulated everyone on the inauguration of the Ram Temple construction work, saying that the temple complex will become a symbol of modern India based on the ideas of Ramrajya.

Taking to Twitter, Kovind wrote (translated from Hindi), "Congratulations to all on the inauguration of Ram Mandir construction! The temple of Maryada Purushottam Prabhu Ram is being constructed in accordance with the process of justice and with the enthusiasm of public and social harmony. Temple complex, I believe, will become a symbol of modern India based on the ideals of Ramrajya." Yogi Adityanath Says Credit for Ram Temple Goes to PM Narendra Modi.

Felicitations to all for the foundation laying of Ram Temple in Ayodhya. Being built in tune with law, it defines India’s spirit of social harmony and people’s zeal. It will be a testimony to ideals of RamRajya and a symbol of modern India.

The Prime Minister is also scheduled to unveil a plaque to mark the occasion and also release a commemorative postage stamp on 'Shree Ram Janmabhoomi Mandir'.