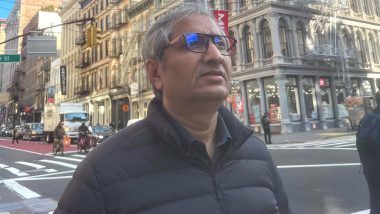 New Delhi, Nov 30: Senior journalist Ravish Kumar has resigned from his post as senior executive editor at NDTV India, according to reports.

As per the reports, the news channel is said to have announced his resignation through an internal communication on Wednesday.

"Few journalists have impacted people as much as Ravish," reports quoting the internal communication said.

The resignation came a day after the new NDTV board approved the resignations of founders Prannoy Roy and Radhika Roy as directors of RRPR Holding Private Ltd (RRPRH), the promoter group vehicle of NDTV. This meant that the existing and longstanding promoters and management of NDTV has now exited the company.

The board also appointed Sanjay Pugalia and Senthil Chengalvarayan as directors on RRPRH board with immediate effect.

It needs to be mentioned that NDTV's promoter firm RRPR Holding had on Monday stated that it had transferred shares constituting 99.5 per cent of its equity capital to Adani group-owned Vishvapradhan Commercial (VCPL), thus completing the official takeover of NDTV by the Adani group. Gautam Adani-Owned Adani Group Wins Redevelopment Project For Asia's Biggest Slum Dharavi With Rs 5,069 Crore Bid.

(The above story first appeared on LatestLY on Nov 30, 2022 10:35 PM IST. For more news and updates on politics, world, sports, entertainment and lifestyle, log on to our website latestly.com).