Rehana Fathima, Kerala-Based Activist, Booked For Facebook Video of Her Kids Drawing on Her Half-Naked Body 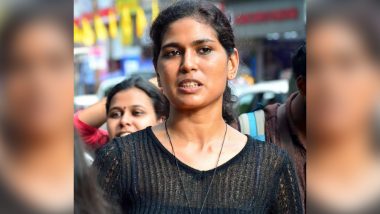 Kottayam, June 24: Kerala Police has booked activist Rehana Fathima after a video of her lying half-naked and allowing her two children to draw painting on the body started circulating on social media. Thiruvalla Police in Pathanamthitta district has registered a case against the activist based on the complaint of Arun Prakash. The 34-year-old activist had sparked controversy in 2018 when she had tried to enter the Sabrimala temple when it was opened for monthly puja in October.

Fathima had shared the clip on her Facebook account with the hashtag #BodyArtPolitics, justifying her actions. “The feminine body and her nakedness are more than 55 kg of flesh, compared to the male body. Leggings are aroused by the sight of the legs, while the man standing with his knees bent over his chest and his legs half-naked, forces men and women to approach the body in a manner that does not elicit ejection," she said.

Meanwhile, a case has been registered under section 67 of the Information Technology Act (electronically transmitting sexually explicit content) and Section 75 of the Juvenile Justice Act (JJA) for cruelty to child.

(The above story first appeared on LatestLY on Jun 24, 2020 07:21 PM IST. For more news and updates on politics, world, sports, entertainment and lifestyle, log on to our website latestly.com).