Republic Day Parade 2022: Warli Art of Maharashtra To Be Proudly Displayed at R-Day in New Delhi

A third canvas named ‘Circle of Life’ focuses on tribal religious beliefs, deities, worship of nature, animals, traditional dance and so on. “Tiger is very important in our culture”, states Wangad. This canvas has shown their sentiments centering the feline species. 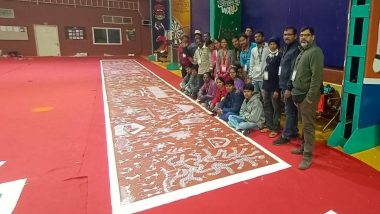 Mumbai, January 24: Maharashtra’s Warli art will be proudly displayed at the Republic Day Parade in New Delhi on coming Wednesday (January 26, 2022), courtesy an initiative called ‘Kala Kumbh- Azadi Ka Amrit Mahotsav’, jointly organized by the National Gallery of Modern Arts, the Ministry of Culture and the Ministry of Defence. Twenty Warli artists from Palghar district have employed their artistic skills to portray the rich tribal culture in five huge 6ft by 45 ft canvases at a workshop held at Chitkara University in Chandigarh during December 26 – 30, 2021. They were joined by 230 more artists coming from various parts of India, as part of the event which marks 75 years of Independence.

Rajesh Wangad who participated in the workshop is a much-acclaimed Warli artist from Ganjad village in Dahanu taluka of Palghar district. He states, “The five canvases have been used to portray various aspects of tribal culture starting right from pre-independence era to the present days”. Speaking to PIB, he described the themes of each canvas, on which twenty artists have worked together to bring alive their identity and patriotism.

The subject of the first canvas was ‘conflict and exodus’ as faced by the tribals in British era. Shri Wangad mentions that tribal people were the first to fight against the foreign intruders who had wrested away their forest lands and subjected them to persecution and injustice. Traditional weapons like bow and arrow, stones etc. which were used by the tribal soldiers in fighting the British have been shown in this canvas. Republic Day 2022 Celebration Details: Know Timings of January 26 Parade And Beating Retreat Ceremony; Here's When And Where To Watch Live Streaming.

The second canvas brings to life the ways and mores of tribal life in an independent India. In this canvas, the Warli artists have portrayed the changes that came in their society and livelihood after attaining independence from the British. Government schemes for their welfare, their traditions, ceremonies and dialect have symbolically been entered in this canvas.

A third canvas named ‘Circle of Life’ focuses on tribal religious beliefs, deities, worship of nature, animals, traditional dance and so on. “Tiger is very important in our culture”, states Wangad. This canvas has shown their sentiments centering the feline species.

The fourth canvas has a theme of tribal marriage ceremonies. “During a marriage in Warli households, the entire family, starting from children to grown-up men and women, paint the outer walls of their houses together”, informs Wangad. The subject of these paintings includes nature, flora and fauna. It includes traditional motifs surrounding gods and goddesses called ‘Lagnachauk’ and ‘Devachauk’. The fifth canvas focuses on their traditional agriculture and harvesting methods.

Chandana Chandrakant Ravate, one of the four women artists in the group, states, “Our work in Kala Kumbh illustrates our traditions and the struggle faced by our unsung heroes for attaining freedom of the land”. “I feel lucky to have been a part of Azadi Ka Amrit Mahotsav by means of Kala Kumbh workshop and thereby getting a chance to remember our revered freedom fighters once again”, she added. Smt. Ravate also stated that “Traditionally, Warli art was practiced by women, though men are now dominating this profession. I want to train more women in this art to restore their past glory in this field”.

The gigantic and spectacular scrolls created under the unique initiative ‘Kala Kumbh’ have now been installed at the Rajpath for the Republic Day 2022 celebrations. The scrolls, painted by local artists drawn from different regions, adorn either side of the Rajpath and present an awe-inspiring view. Shri Govind Mohan, Secretary, Ministry of Culture stated last week that the varied art forms of these artists are also reflected in the scrolls which have been brought together on a single platform in the true spirit of Ek Bharat Shrestha Bharat. After Republic Day, the scrolls will be taken to different parts of the country and exhibited there as part of Azadi Ka Amrit Mahotsav. Kala Kumbh - Azadi Ka Amrit Mahotsav reflects the essence of unity in diversity and the glorious history of its people, culture and its achievements.

(The above story first appeared on LatestLY on Jan 24, 2022 10:04 PM IST. For more news and updates on politics, world, sports, entertainment and lifestyle, log on to our website latestly.com).