After the talks, Zelensky said Ukraine is counting on Spain's and Denmark's military and financial assistance amid the conflict with Russia. 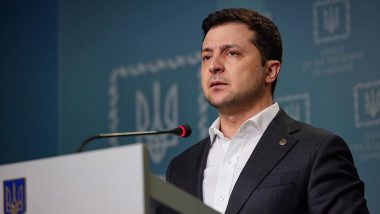 At a meeting in the Ukrainian capital Kiev on Thursday, the parties touched upon the issues of strengthening Ukraine's defence capabilities, supporting Ukraine's integration into the European Union (EU) and the post-conflict recovery, the Ukrainian presidential press service was quoted by Xinhua news agency as saying.

After the talks, Zelensky said Ukraine is counting on Spain's and Denmark's military and financial assistance amid the conflict with Russia. Russia-Ukraine War: President Putin Orders Troops To Block Azovstal Plant in Mariupol.

"Ukraine's needs have been explained to our guests today. We are waiting for prompt aid from them," he said.

Besides, Spain has sent some 200 tons of ammunition and other materials for Ukraine, Sanchez said. He added that Spain will fully support Ukraine on its path to EU membership.

Meanwhile, Frederiksen noted that Denmark has provided substantial political, financial and sanctions assistance to Ukraine since the conflict with Russia started.

"The EU and global partners have imposed unprecedented sanctions on Russia, and together we will do even more," she said.

Frederiksen also announced that Denmark stands ready to participate in the post-conflict recovery of Ukraine's southeastern city of Mykolaiv.

Sanchez and Frederiksen arrived in Kiev earlier in the day.

(The above story first appeared on LatestLY on Apr 22, 2022 08:09 AM IST. For more news and updates on politics, world, sports, entertainment and lifestyle, log on to our website latestly.com).